After this Monday’s village board vote rejecting a comprehensive feasibility study to create our own local school district, I was almost at a loss for words…

It’s been a few days, so I’ve been able to gather my thoughts, reload, and I’m ready to move forward.

WE SAID “YES,” THEY SAID “NO”
The referendum said “pursue an INDEPENDENT school district.” Not another unified one with Sturtevant and Mount Pleasant. Yet, President Bradley continues to say he would like to join with the other villages. This is deliberately ignoring the will of the people, the exact wording of their April referendum, and now he’s even refusing to fund the study… could it be because it would prove his doubts wrong?

President Bradley: STOP BRINGING UP THE OTHER VILLAGES. Our citizens democratically decided not to join with other villages. End of discussion. Move on. Your actions make me believe you do not want this to move forward.

THEY AREN’T GOING AWAY 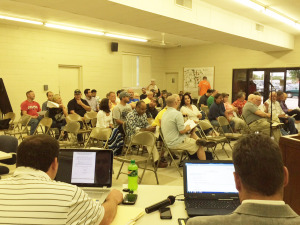 These parents clearly aren’t giving up or going away. And as a fellow village board member, I’m standing with them, not those who seem to hate responsible change and progress. They are our future – President Bradley should want to join them with Caledonia’s legacy, not patronize them while resisting their wishes.

Perhaps getting elected with a few hundred signs and virtually no door knocking made President Bradley oblivious to the real wants and needs of the village. But I have been out there. I have talked with hundreds of residents at hundreds of doors and seen nearly all of them want some kind of change.

These are the people that vote, and if someone doesn’t respect their wishes, we will lose their trust.

WHY THE DUPLICITY?
President Bradley continues to obfuscate and cast doubt on this effort. As Caledonia’s 2nd Village Trustee, I am listening to the voters, not RAMAC or opponents of progress. This is not the 1960’s anymore, and it’s time to forge ahead. It is unfortunate that he has not applied the same level of leadership and laser focus as he did on the water/sewer project out to the Interstate. I respected that highly. But he’s a one-trick pony.

NOTE: There was no referendum needed for this $5 million pursuit, he just pushed for spending the money because it was the right thing to do. $5 million. The study is $30,000.

Both a school district and sewer/water were identified as necessary to the success of Caledonia by the CDA in 2007. So why the blind spot? Politics? Apathy? Obliviousness? Personal conflict?

The day after the April 7 vote, he did NOT rejoice, he was NOT impressed. He did not embrace the historic moment. Instead, he was quoted as saying “I can’t imagine us going and investing $30,000 in something the state isn’t going to support anyway.” He had already made up his mind, even BEFORE the vote.

That is not leadership, it is like refusing to use a microwave because it’s new and shiny and you’re unsure about it. It’s ok, Bob, change is a good thing. He has declared on more than one occasion that he doesn’t “believe we can afford it on our own.”

HOW DOES HE KNOW? The study would let us know if we can. So why wouldn’t he fund it?

December 12, 2014, Bradley met with me, Brian Dey, our village administrator, Rep. Tom Weatherston, and Speaker Robin Vos. It was at this meeting where the specific study (an update of 2009’s) was mentioned as a condition of pursuing a legislative change, but Bradley now doubts it is comprehensive enough. The presentation on Monday night showed the study is actually MORE comprehensive than the last one. We are responsible for meeting the goals given to us, not debating first where decisions down the road may lead. Sen. Van Wanggaard explicitly said he wants to make this happen, but wants to know there’s local support and enough local determination and financial proof to sell it to his fellow senators.

We’ve been asked by state leaders to accomplish two things: a referendum and a new study based on the previous one.

We’ve done the first, but President Bradley has rejected the second.

President Bradley cannot lead from behind any longer. He was cynical about the referendum and he has resisted the study. I am encouraged that so many parents have decided to no longer give him power over this process. He does not believe in it, but many others do. A majority of voters, in fact. More power to them. He will be left behind on this issue if he does not listen.

It appears the village board has been fired. They’re out of this democratic process now and the parents of Caledonia’s future are moving forward.

Jump on board, Mr. Bradley.