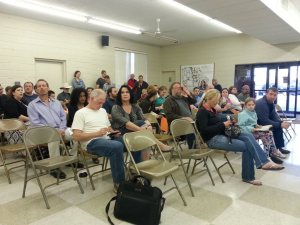 On April 7th, Caledonia voters approved a referendum question, “Should Caledonia pursue the creation of an independent school district?” It was the culmination of over 10 years of work by residents going back to 2002. The village board felt that any movement on the issue needed the approval of voters. They got that approval.

Meanwhile, state leaders indicated that a feasibility study on a new district would help them persuade legislators on a change in state law allowing Caledonia to decide it’s independence. For nearly a decade, Racine Unified leaders have indicated they will not support such a split. They essentially have veto power. So the expected process had become: vote – study – law change – vote.

Yes, we need to prove the feasibility of a decision before even having the right to make that decision. But I digress… So here we are, stuck on the first “vote.” No movement, only platitudes and attempts to “fix” Racine Unified District, rather than giving us the ability to vote on the split. Why?

State Senator Van Wanggaard has come out in support of the concept, saying that local voters should have the decision in their hands, not the unaccountable board they’re seeking to leave. On the Assembly side, Speaker Robin Vos has indicated that he prefers the study first, before selling the idea to his colleagues. The response of our village board has been to play chicken with Madison, saying they won’t do the study without first a change in state law. This kind of gamesmanship is best left to cable and Netflix dramas, not municipal government. And voters expect something different. It is either a good law, or a bad law. Which is it?

Ironically, becoming a town in 2005 required a similar law change in Madison, except then it was only for Caledonia. The next year, residents voted to become a village. Currently, residents are seeking an amendment to allow ANY district to join or separate from districts – placing that decision solely in the hands of the municipality seeking the change. By the way, no feasibility study was required to allow Caledonia to become a village.

SO WHO IS GOING TO FLINCH FIRST AND TAKE THE LEAD?

Think about it. It bears repeating: Leaders are telling Caledonia residents that they will not give them the power to decide unless they can prove it’s financial feasibility, first.

Fine. Then, the onus is on Caledonia leadership to make the next step. And the time is now, not “after some questions have been answered.” Your questions already have been answered. Namely, one, on April 7th. That is all you need to know before doing what they expected.

During this process, leaders must curtail their ambition and self importance – they are not being asked to create a district. They are not being asked to figure out what’s best for all of us. They aren’t being asked to wade through the details before giving us the power to decide. Residents are merely asking to be allowed the commonsense right to determine for ourselves. That is all. We decide what is best for us. We read and vote, based on the study’s findings. We should hold that decision, and making us wait is tantamount to telling residents they aren’t smart or wise enough to make it on their own.

MESSAGE TO THE UNDEMOCRATIC ONES

I’m sick of seeing families leave my village each year. I’m tired of seeing friends open enroll their children because of inaction. I’m weary of a village board stalling year after year after year when all it takes is some fortitude and ambition. If you believe it’s best for the village, then get behind it. If you don’t, then either persuade people to your side or get out of the way. Enough. Stop stalling.

The vote was held. Some of you clearly hoped it would fail, but it didn’t. Time to do your jobs, while the rest of us do ours.

Disclosure: Ed Willing is a Caledonia Village Trustee and has been a vocal supporter of the independent district initiative. He believes it is essential to the future viability of his village. His views are his own, as a concerned citizen.