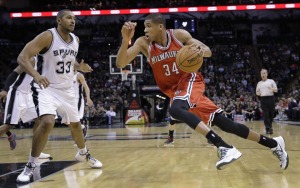 According to Milwaukee radio show host Mark Belling, a massive quake just hit Wisconsin politics. In one of the greatest bluff calls in the history of local negotiations, the Menominee tribe of northern Wisconsin just one-upped their previous commitment to cover potential losses by the state of Wisconsin, with an “offer” that would make Marlon Brando proud, and everyone else smile.

The Menominee and Seminole tribes have stepped up to the plate with an additional $200 million offer that is hard to refuse, because it would pay for the state’s controversial portion of a proposed deal being considered to build a new NBA arena for the local Milwaukee Bucks. It also presents a fascinating gesture of goodwill toward the adopted city of resistant Potawatomi Indians operating the Milwaukee casino. Ironically, the Potawatomi casino is located in the river valley, pertinently named the Menomonee.

This would place two large casino projects approximately 35 miles apart, with the Hard Rock project being built at the site of a now-closed dog racing track that shuttered years ago.

Sources close to the situation reported to Belling that if the governor reverses his decision to reject the project they will not only abide by all previous offers to cover losses in revenue from the Milwaukee Potawatomi casino, and have not only taken out a $250 million bond to cover those losses and potential legal expenses related to litigation, but also have offered to fill the remaining gap in financing the contentious arena proposal.

The announcement puts the onus back on Gov. Walker, who announced his rejection of the deal days before announcing his plan to support a redirection of state revenue to help finance the Bucks arena. He communicated the rejection during a weekend event with Iowa conservatives, who (coincidentally?) warned the governor of grave consequences if he approved the Kenosha project.

The confusing juxtaposition of announcements left many Republican legislators frustrated and wary of such a deal that would cost immediate revenue, opposed to the Hard Rock casino, which would generate thousands of jobs and hundreds of millions of dollars in fees to the state.

New Bucks owners have assembled an agreement for $250 million of the project, making this current offer, if true, a bonafide private investment, leaving the government off the hook for potentially $1.4 billion in new development.

This kind of scenario is extremely rare, but if it succeeds would lead to massive new projects in two cities in Southeastern Wisconsin and Governor Walker relieved of a possible political hot potato entering the 2016 presidential race.

Stay tuned for updates to this story as sources are contacted and confirmed.