The Menominee Tribe of northern Wisconsin has appealed one last time to Governor Walker, regarding his decision to deny the Hard Rock entertainment and casino development in Kenosha, Wisconsin. It would have been constructed on the site of a previous gambling facility for dog racing that stopped operating years ago. 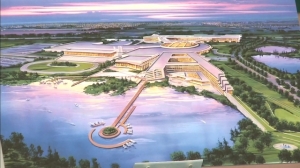 The Menominee found a development partner in the Seminole tribe of Florida, as well as the well-respected Hard Rock franchise name that came with it. The Menominee retained 75-80% of all revenue, and the project would have contributed tens of millions of dollars per year to the state coffers, and well as been a jolt of $800+ million into the local economy and a sure draw from Illinois residents who have to travel to other states to satisfy their entertainment needs. The plans called for one of the largest high end entertainment complexes in the midwest, with theaters, auditoriums, restaurants, a spa and of course a hotel/resort.

The powerful, but controversial Potowatomie tribe resisted, spending millions of dollars to shut down the plans under the hypothesis that the development would be too much competition for their Milwaukee casino complex.

Governor Walker denied the request the same week as his arrival in Iowa to give an address to conservative activists opposed to gambling, and had written letters threatening the governor’s potential GOP nomination for the presidency in 2016. Now, two weeks later, the tribe is again appealing to the governor now that the entire nation has seen his given concerns have been addressed, three times over. Sen Van Wanggaard, Speaker Robin Vos, Rep Samantha Kerkman, Tom Weatherston as well as their Democrat Party counterparts signed a bipartisan letter last week outlining the several ways the state had been indemnified of any potential losses. But the governor stood fast, leaving many bewildered at his unexpected decision.

Here is the latest letter, once again dispelling all concerns the governor’s staff has reiterated. CLICK FOR FULL TWO PAGE LETTER. 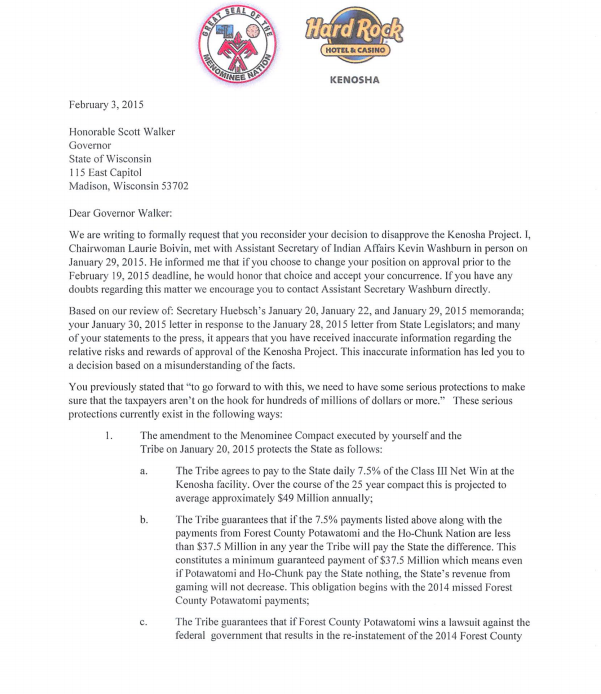