On October 22nd, a parent/teacher meeting at Starbuck School for an engineering program hosted Michael Frontier, a school board member to discuss the pending referendum vote with parents and students.

His appearance was accompanied by the distribution of two-sided flyers that asked residents to vote “yes” on the controversial Racine Unified referendum and also a ballot question on raising the minimum wage from $7.25 to $10.10 an hour.

Coordination is not known, but neither is clarification.

Not only does Racine Unified policy forbid discussion or implementation of political activity in such venues, but allowing flyer distribution is also forbidden and rubbed several people the wrong way.

Sources immediately informed Kristie Formolo, an active parent, former RUSD board candidate and dedicated mother of two. Her children attended RUSD schools for over 10 years, but she could barely believe her ears… until she saw the flyer. It was no misunderstanding: 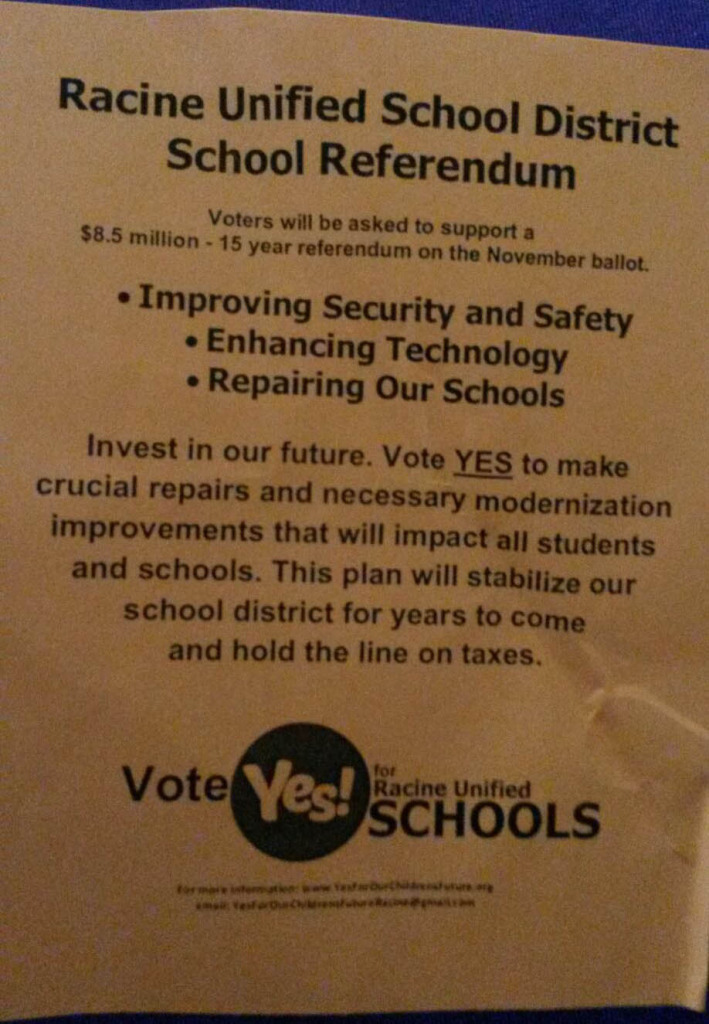 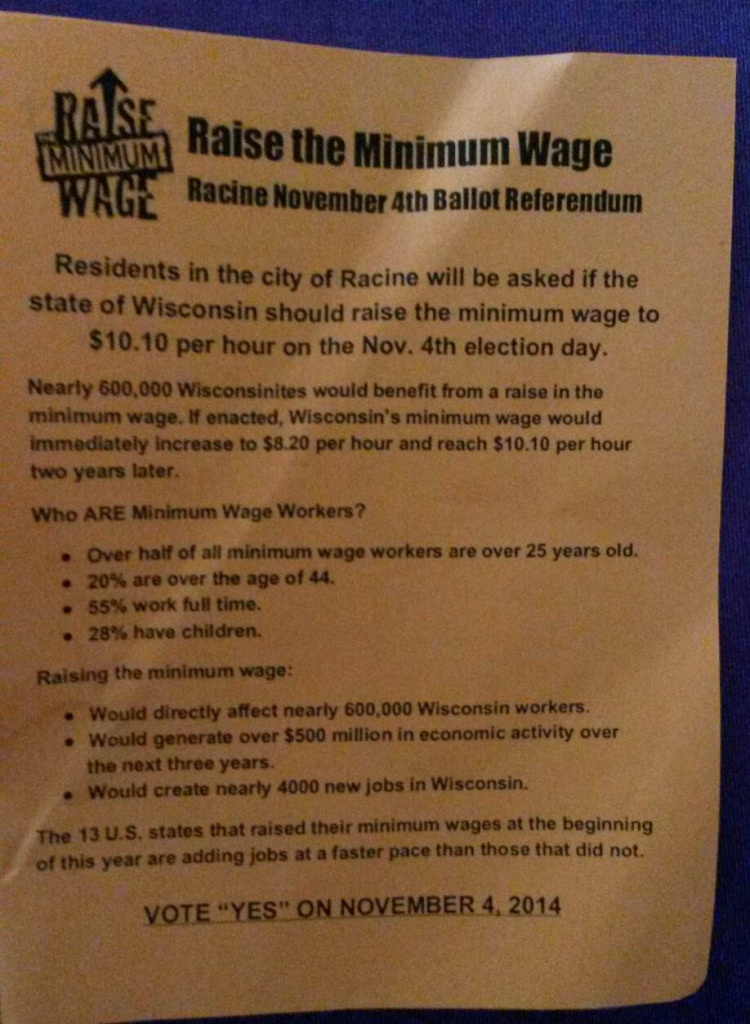 On October 27th, Formolo wrote Mr. Frontier to verify the claims. She wanted the truth. She merely asked for clarification of what happened and who was responsible for what. The flyer was clearly assembled by members of the Yes! for Racine Unified, a front group whose committee is made up of the entire Racine Unified board. Perhaps it’s just coincidence that Frontier is a committee member of this organization that created the flyer.

Not surprisingly, she received no response.

Undeterred, on October 30, Formolo sent a follow up email to see if Mr. Frontier received the first, and this time attached pics of the distributed flyer. This time, she copied the entire RUSD board, Superintendent Dr. Lolli Haws and two members of the local media.

This is the text of that email:

This is my 2nd request.  Did you receive the email that I sent on Oct. 27th?   Please let me know if I sent it to the wrong email address.  I am also attaching 2 photos of the double sided flyer that was handed out by the student at Starbuck.

I was wondering if you could clarify why it was necessary for you to speak at the Starbuck Middle School Engineering meeting last week.  I’m glad you attended the meeting, because this is a great program.  What I find troubling is that this was a meeting for parents and students about the engineering field trip.  It was NOT a meeting regarding the 128 million referendum that is being voted on.  It was not a meeting for Racine Residents to learn more about raising the minimum wage.

Correct me if I am wrong, but isn’t that considered bringing politics into our schools?

As a school board member I would think you would understand the political implications of doing this.   I have listed 3 questions below.  I hope you will take the time to answer my concerns.

Again, no response from Mr. Frontier.

Instead, Superintendent Haws just hit the reply button – perhaps in haste – because her reply appears intended for the Racine Unified board, but instead was sent only to Formolo.

WHEN GOVERNMENT CROSSES THE LINE

In the email, Haws “suggested that the board members not respond,” or, if they “felt compelled, perhaps work with [RUSD spokewoman] Stacy [Tapp] to develop a response with one voice.”

Formolo is a “person vehemently opposed to RUSD in all regards,” Haws lamented, and warned the others of her vocal opposition to Dr. Galien’s visit to Walden recently for a student-requested “town hall” effort… led by none other than a child of one of the staff.

It is unknown if Haws realized her mistake.

Not only does she appear to be directing the response and behavior of the board she works for but crossed the line to accuse Formolo in the email. Of course, the intended audience never read it because Formolo was the only one on the email.

The next day, October 31, Frontier finally responded to Formolo.

“Mr. Allen, the volunteer engineering supervisor invited me to speak,” said Frontier. He doubles down and admits he spoke “with the parents how the referendum could support engineering programs in our schools through funding for technology.” He continued that “the district plans to offer students career pathways in their sophomore year. Some of these will be in the areas of health, manufacturing, criminal justice and automotive.”

He finished by boldly stating, “I pointed out that a successful referendum will bring more hands-on technology to these middle school students when they are sophomores in high school.”

What a sales pitch for the referendum, right? Precisely the kind of politicking that was forbidden by the original policy, adopted by the RUSD board in 2006.

But, a “volunteer engineering supervisor” invited him…

And somehow – with plausible deniability, of course – a dual flyer was distributed pushing the referendum AND the minimum wage. You can imagine the response if opponents of the referendum requested to appear at school functions and distribute flyers and have elected officials discuss the massive surpluses RUSD has enjoyed the last three years, or the fact that RUSD is flush with so much cash, they’re lowering the mill rate this year.

But those things would never see the inside of a school.

Formolo responded, repeating her three questions, but Frontier did not reply.

She decided after much thought to write an unsuspecting Lolli Haws back, reminding her that she is, in fact, an involved parent and has been a great asset to Racine Unified for many years.

We have included the entire text of her email:

I received the e-mail below that you intended to send to the school board members.  I find it outrageous that you would attempt to obstruct my lawful and civil request for information from the board members.  I am also upset that you would slander and defame me to the board members.I have worked tirelessly for many years to try and improve RUSD for our children. For you to suggest that I am seeking a platform just because I questioned the legality of handing out political paperwork at our public schools is ridiculous.

I have been actively involved in RUSD for more than 10 years.

I have been a PTA President and Vice-President at an elementary and middle school.

In 2009 I was one of three people in the entire district who were given an Oak Leaf award for our active involvement in our schools and PTA.

Even when our children were no longer in RUSD I came back and volunteered at Mitchell Middle and Case High School, and I continued attending the Parent Key Communicator meetings with Stacy Tapp.

I even stepped up and ran for school board because of my concerns and my desire to make positive changes to RUSD.

Rather than “…develop a response,”  why not just tell the truth.  What happened to your vow of an open and transparent district?  I am a concerned citizen and taxpayer who is not afraid to speak up when I hear of possible improprieties in our schools, and I will not let them go unchallenged.

Ms. Haws has not offered a response to date.

Perhaps she’s still trying to figure out how she hit the wrong button, or is merely “developing a response.” But it is clear that something inappropriate happened, and without knowing exactly who was involved in the coordination, the board members have collectively ignored taxpayers and even slandered them in what they thought was a private discussion.

This is the board that Racine Unified has elected.

This is why it is time for area villages to chart their own course and create local, accountable school systems. But meanwhile, we sit under the authority of a school board that is in the least unethical and possibly scandalous.

Dr. Lolli Haws and spokeswoman Stacey Tapp finally met with Formolo and one other concerned parent. At this meeting, it was revealed that Mr. Frontier DID in fact bring the minimum wage/referendum flyers (above) that were distributed to the parents and students. He admitted it to Haws and Tapp. 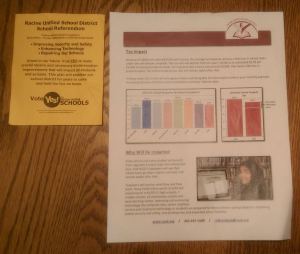 The explanation was needless and trite, as much it was unbelievable. They explained Frontier claimed it was a “mistake,” having grabbed the wrong flyer from his trunk. Perhaps these flyers are easily confused:

Do you feel this is appropriate behavior of an elected school board member?

This article has gone viral in the last 24 hours, getting several thousand hits and was featured today on Charlie Sykes’ radio show. Podcast HERE.