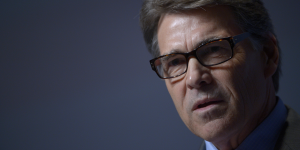 I have been researching Rick Perry for two years. I was tentative at first. Then late last year I finally began to realize this was the man for the job in D.C.

Since February I’ve been talking about him on my wall and social circles, and since April I’ve been actively pushing for his candidacy as U.S. President.

Upon the eve of his announcement and within 24 hours of his spokesman Mark Milner revealing his intentions to run, I have been barraged on threads, my wall, email and elsewhere on his lack of Conservative credentials. I will address each one effectively, absolutely, and with good conscience. At least begin to…

The first erroneous claim is that he blew up the state budget as Governor from $44 billion to $95 billion, and has created a debt per capita ratio higher than California.

First, one must understand that historically, Texas hasn’t bestowed much control in the Governor’s hands. That has changed slowly over time, and is now becoming more significant in the last few years. But until Perry came into office, very little could be done by the Governor to rein in spending unless he has a super majority in the legislature.

That being said, he presided over incredible population growth, a HUGE influx of poor (estimated 2-3 million illegal immigrants) and ballooning union-driven costs like pension, education and health care.
But… TWICE he lowered the year over year budget expenditures. THREE TIMES he managed to lower taxes by moving the collections to different columns of revenue sources. And finally, his reforms in the legal system have created the most business friendly state in the nation.

Let’s focus first in this post on the claim he “blew up the budget… what would he do in D.C.?!”

Perry managed to keep general state expenditures at his disposal (transportation, protection, some welfare) in check, with only about 25-35% growth, relatively speaking, while the state’s population grew 21%, and a major influx of poor, mexican nationals and their children flooded the schools, hospitals and welfare rolls.

Here, in our State of Wisconsin we have proven that with 100% control of leadersip by Conservatives the union grasp on local governments can be scaled back! I look forward to Perry and others like him in Congress helping to rein in the out of control spending older establishment big spenders have engaged in.

I believe lost in the media circus and establishment fear has faded the true message of what the candidates really represent based on not only their own words, but their records; in fact, lost as well is the reason why we elect leaders in the first place.

We need people who see beyond the title and position and see the power to change, based on the RIGHT principles. They don’t merely manage, they transform. Howard Schultz, Steve Jobs and many other iconic chairmen and CEO’s of our time have succeeded by focusing their respective entities on their original principles, and creatively insipiring their people to follow them to the vision they see.

Debates are not where this inspiration happens. It occurs at a podium with a Presidential seal on it; on headlines that report the progress of the right policies; in the communities that resemble the world in which we want our kids taught, entertained and raised in; and in the bank statements that reflect an economy that helps everyone.

I see beyond the title and position and I see a President Perry giving us 8 years of the kind of change we were hoping for.