Tick, tock, tick, tock…
As I’ve been preparing for our journey to Iowa this weekend for the GOP Caucuses, I’ve found that my motivation and creativity has already landed in Iowa, making the focus on my business here a bit more difficult than usual, the week after Christmas. But, I must keep progressing as I take a few days away from my own business, leaving it in the hands of my trusted management team.

The Christmas wrapping is not even cleaned up yet, the race tracks are still littering the bottom of the tree and the half-eaten candy canes are still strewn across the living room. Riley played Pirate and steam engine builder all week (yes, I bought and built with him, a REAL steam engine) while I prepared myself for the weekend in Des Moines. The next few days will see – no exaggeration – thousands of alien politicos from around North America descend upon the corn fields for a piece of the pie as Presidential candidates give one last appeal to win Iowans’ vote on Tuesday, January 3rd. This is the non-stop, fast-paced crop circle I’ve chosen to jump into, and I couldn’t be more excited.

Other Parental Patriots from around the country are bringing their little buggers too, so I’m not the only one. However, I think I’m one of the few single parents crazy enough to try. Riley will be bringing a fresh Christmas load of presents to keep busy, but I fully intend on bringing him to events as much as possible. He’s at this stage now in his four and a half years of life where he listens to what people say then sounds out entire phrases with a question mark at the end. “Rick Perry is a cool guy?” he says. Yes, I expect him to have a significantly developed vocabulary by next Wednesday when we return home. “Caucus”, “ethanol”, “bailout”, “Texas” and “Constitution” are on the pre-school spelling list already. I’ll be sure Riley engages his Dora the Explorer Phonics iPad app all weekend so he’s prepared for this experience. 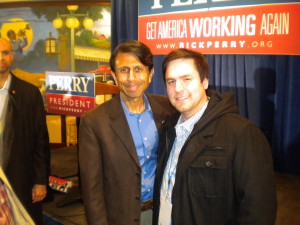 The only part of the trip I’m not looking forward to is the six hour drive through Chicago and the monotony of flat, government-mandated farm fields with a four-year-old that will be asking to stop at every gas station he sees. But I will be travelling with my cousin who is playing nanny for the week, and another political activist friend of mine; surely it will take the edge off.

The last three weeks have been a fascinating study in Primary politics, media news cycles and polling. When I last wrote here, Gingrich was surging on his ability to speak alone, and Cain was falling apart under the inability to discuss Libya without a water bottle. Governor Rick Perry has since gained steadily two to three percentage points per week as he tours the state to standing-room only crowds that, if nothing else, are interested to hear him speak their language on local and national issues with such confidence, even if they are still unsure of their support for him come next Tuesday. “Retail Politics” is what this is called, and no one does it better than Governor Perry. He now stands in third place in most local polls, and is second among GOP voters.The Texas Governor has been a public servant in various capacities over the last 25 years: State Legislator, Agricultural Commissioner, Lt. Governor and now 11 years as Governor, and has never lost an election. He has raised more money on the campaign trail in his years in Texas than any statewide public figure in American politics. As he often says, “This ain’t our first rodeo,” and in his last debate in Iowa stated gleefully, “I am starting to really like these debates, and would be there early to debate Obama”[should he get the nomination].

Any objective observer would have to acknowledge that Perry’s steady return from underdog to real contender while staying on message and improving every facet of his campaign is respectable, if confounding and surprising – but surprising only to those who don’t know this Governor. He’s inspiring and determined, and he knows every day issues as well or better than anyone running.
Once I leave Saturday afternoon, I will continue to report from the field and look forward to sharing our travels with you. If there’s any random requests you have back home, let me know. Ronald Reagan figurines in Dixon, IL or famous Cream Puffs from Davenport, I’ll try to bring back what I can. I plan on bringing back a glowing smile of victory to Caledonia by next Wednesday!

America needs leadership and experience, and the support to make the case for the Governor. My son and I are merely a sample of the 2,000+ activists making their way to Iowa for Perry alone, from Bettina in California and Randy in New York, to Chrissy in Florida and us in Wisconsin. This is the kind of energy that wins elections, and the sort of believable enthusiasm America needs. It’s been 30 years since we’ve felt this way.

Soon, you will too.