It’s the first day of a new year and our trip. 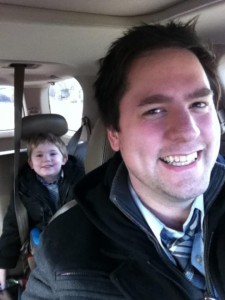 360 miles, five potty stops and two emergency pull-offs to the side of the road later, we arrived in Clive, Iowa outside Des Moines, and it’s been an entertaining ride, to say the least. Immediately, I was invited to a New Years’ Eve bash at the Marriott hotel in West Des Moines. Ringing in the New Year with supporters just as hopeful as me – there’s only a thing or two that would make for a better start to 2012.

Des Moines has to be one of the most unique places on earth at Caucus-time. Everywhere you go, out-of-state plates, rental cars and devotees in unbuttoned shirts and loosened ties litter the shops and restaurants while minivans full of stickers representing different candidates come and go from the hotel entrance with car-fulls of people. In contrast, you can tell who the locals are by the glaze in their eyes from overexposure and the fatigue of these political olympics.

Riley and Maria, who came along to nanny, drove with me to the New Year’s Eve bash hosted by Texans for Perry, the Governor’s campaign organization for the last 11 years. Within five minutes of starting to settle in a fantastic country/rock cover band began to move the more stoic folks out of their corners like a cattle prod as the dance floor filled with Texas-Two-Step and other wannabe-variations by people never built to dance. The author is one of the latter group, so he found a way to become official photographer for two tables; a master at diversion and disguise!

Out of 300 people in the room, Riley took not so much as 15 minutes to become the show-stopper with his own camera. I couldn’t believe my eyes as the volunteers placed a hat on his head and began handing him their own cameras to take their pictures for them. Then, others began taking pictures of Riley taking pictures which was even more entertaining. I had a local hedge-fund managing fundraiser come ask me “he eventually comes out of his shell, right?” Nothing beats being the guest of a kid like this at an event.

This morning, the campaign takes a break. Most of us are attending church and resting before firing up again at 2pm. The staff will have volunteers participate in a day-opening prayer meeting and time for preparation. Training for new volunteers begins at 2 pm. I asked several people about the activity, and they said the daily training meetings have seen anywhere between 30-150, arriving for their credentials and instructions. Today’s registration is expecting hundreds more; The Governor’s volunteer base has swelled to over 1,500 and is expected to top 2,000 by Tuesday. 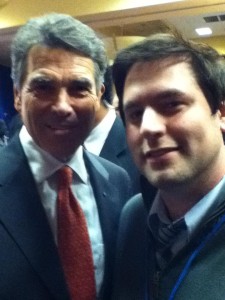 The enthusiasm appears even higher than I thought, and I don’t believe it’s merely Texan pride or southern hospitality making up the difference. Many have been trudging on, like me for months, and dozens have been here on the ground for weeks. Joe Hyde, host of the sitehttp://rickperryreport.com/ has been following the Perry campaign bus for the last two weeks and has confirmed what CBS only yesterday began to confirm: Perry’s campaign stops are frequently double capacity and are by far the loudest of any candidate; CBS’ Rebecca Kaplan implied she couldn’t find a single attendee that said they were not committed or leaning toward Perry after hearing him speak.

As a surrogate speaker, I’ve been told I may be assigned a Des Moines precinct. If not here, then I’ll have an opportunity with Regional Coordinator Mike Thom in the Quad Cities. I should know my precinct by Monday evening. Iowa Caucus goers come from their respective neighborhoods to establishments like schools, churches and libraries where they will listen to others like me deliver short talking points about each candidate, then afterward come and ask questions to learn more about our candidates without media convolution.

The voters attending make their decision that night of whom they support and go home. I predict the evening will be full of the themes of values, federal control and burdensome regulation. The impetus to remove President Obama from office next year must be focused on restoring a faith in America like Reagan once did, and reforming the road to bankruptcy from our centralized, over-spending ways that will lead to severe taxation or institutional default to remedy. This election is about simple principles, not a Candidate’s view on 130 different policies. Governor Perry believes that most of these policies should not even be the discretion of a cabal in Washington to begin with, so it allows us to refocus the Federal Government on things it was meant to do and do well – national defense, equality of interstate commerce, management of our world trade affairs, protection of our borders and guidance of interstate infrastructure needs.

I hope and pray this New Year of 2012 will ring in a new paradigm of how we view our Government in the words of two Presidents that reveal the A and Z of the Progressive disease:
“We must not let our rulers load us with perpetual debt. We must make our election between economy and liberty or profusion and servitude. Taxation follows that [latter choice], and in its train [is] wretchedness and oppression.” – Thomas Jefferson, 1816
“So… ask not what your Country can do for you – ask what you can do for your Country.” – JFK, 1961

I am a pragmatic idealist, I admit it. But I do not believe that my idealism is unrealistic, it is principled and dedicated toward moving toward the right goal. The times are very serious and require particular expediency, but whether you think a man like Gov Perry can accomplish this or not in his time as President must yield to the optimism of restoring our nation, one elected official at a time.