In an epic rant, Reverend Johnathan Gentry posted a video lambasting the behavior of rioters in Ferguson, Missouri that have protested the death of Michael Brown on Saturday. Brown was shot dead by officer Darren Wilson during an altercation when police stopped Brown and his friend and ordered them to a sidewalk for questioning after Brown was tagged as being a suspect in a strong-arm robbery earlier in the day. The two men refused. The rest of the details are still murky and an investigation is pending.

While Gentry stopped short of blaming the two young men for the situation, he expressed outrage that he feels is proven by the racial riots in the aftermath.

The reverend was featured on the morning show Fox & Friends and clearly articulated his point in the video by saying “this is about rebellion.” He goes on to say that while he sympathizes – and has been on the losing end – of the behavior black youth complain about, “you’ll never change things until you change it!”

He then quotes several passages of the Bible that speak about conflict and mistreatment and says that this situation would have never happened if these men had humbled themselves and responded appropriately, and biblically.

This is his original video:

Gentry has received generally positive support for his words and it has gone viral. More than 19,000 people have liked his FB post and it has been shared over 136,000 times since last night. At times he mocked black responses and gave a somewhat entertaining rant about what he feels is the source of continued racial problems.

He cited Deuteronomy 2:3 where it says, “We have toiled this mountain long enough” and said “they [Israel] had wandered the wilderness for 40 years. It’s been 50 years since we sang ‘We Shall Overcome.’ WHEN will we overcome? All we are doing is going in circles. Black Panthers, NAACP come out of the woodwork…. when there were 60+ shootings in Chicago a few weeks ago, where were you?” 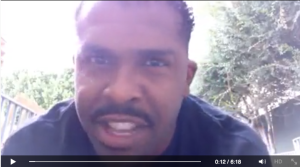 Gentry made note that in every case of police brutality that have been talked about lately started because the black men involved were “resisting arrest or causing trouble.” While the specifics of those other instances aren’t known, he was correct about the Michael Brown situation after the police report and witnesses have indicated that Brown was involved in a strong-armed robbery earlier in the day, and there was a physical altercation at the scene of Brown’s shooting with his friend. Brown had also refused to obey initial police orders, according to accounts.

On his Fox & Friends appearance Friday morning Gentry made an even better case for cultural change and unity.

When asked about those who feel they’re pulled over just because of their race, Gentry replied, “I’ve been pulled over MANY times… I know how to act when I’m pulled over. HUMBLE yourselves. That’s the problem. It just escalates. The Bible says in Proverbs 15:1 ‘a soft answer turns away wrath.’ Swallow your arrogance. If you didn’t do nothin’ what’s your problem?”

“That’s our problem today as… African Americans. We just feel like we’re constantly challenged, so it’s an ego thing – it’s just a competition and it doesn’t help. Someone needs to humble themselves. I understand there are bad cops out there… but some of these gentlemen, officers need to do their jobs. Swallow your pride, that’s the only way you get ahead!”

Frankly, I feel that if, and when a police officer does the wrong thing, report them. Sue them. Go about it the right way, rather than being a martyr for it. The real problem is truly lost in the proceeding riots held in your place after you’re dead. Is it worth it? Gentry may be on to something.

The Fox & Friends anchors weren’t entirely comfortable with Gentry’s comments but nonetheless gave him a national audience to make his case: