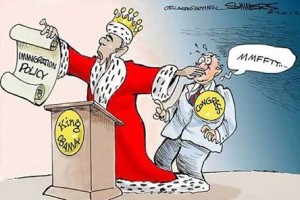 I call it the double-down blunder. Perhaps more daring than a Junior High taunt and more surprising than a Raiders Superbowl, President Obama has addressed the impeachment topic on his own several times, calling what he sees as a bluff among Conservatives – I think he is hoping the talk intensifies.

President Obama is only the latest in a long line of presidents fallen to impeachment talk. But is he intimidated by it?

The president’s response to impeachment whispers was to come right out and dare a Congress frustrated with clearly unconstitutional behavior, and follow it by doubling down on the very activity driving our disillusionment. Last week, President Obama warned Congress that if they don’t take action on an immigration reform bill that he would take executive action to grant amnesty to approximately 11-16 million illegal immigrants. GOP leaders are aghast at such brazenness and perhaps we can’t blame them. Most politicians would stay quiet and let it fester – Obama went right for the bluff.

Congress has a right to be dismayed. It is not debatable that this president has overstepped his constitutional limits, and naturally, it makes conservatives and GOP leaders furious. Bad leadership, incompetent think-tank governance and faulty policy have defined this presidency, but they are not enough to impeach and convict. However, the beauty of the Founders’ three leg system of government is playing it’s role.

There may not be bipartisanship in Washington, but there could be a bicameral wall being built, between the increasing GOP presence and Supreme Court. 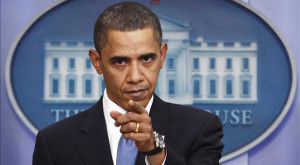 The court dealt a blow to the government’s position on forced unionization in Illinois in Harris v. Quinn, causing a ripple effect nationwide and possibly opening the door to future right-to-work policies in more states.

As recently as June 26th, the Supreme Court ruled unanimously against the administration for recess appointments he is constitutionally barred from making. One of the most liberal members, Justice Breyer felt compelled to write in the majority opinion that “the Senate is in session when it says it is. The President lacked the authority to make those appointments.”

In McCullen v. Coakley, in June the court ruled against an amicus brief, regarding the stifling of first amendment protest rights in Massachusetts.

Furthermore, the President has suffered a record 20 unanimous losses in a divided court so far in five and a half years. His predecessor faced 15 over eight years. After only a few losses his first term, the number of losses have spiked as court challenges weave their way through the system, meaning he could be on pace for between 40-50 losses. His defeats in court range from misinterpreting deportation law to the notorious Hobby Lobby case, his signature health care law taken down another notch.

Nine-to-nothings don’t happen very often. And this president is racking them at an historic pace.

Other unanimous SCOTUS defeats – some of them are just head-scratching and common sense:

• You cannot attach GPSs to a citizen’s vehicle to monitor his or her movements, without having any cause to believe that a person has committed a crime (United States v. Jones);
• You cannot deprive landowners of the right to challenge potential government fines as high as $75,000 per day and take away their ability have a hearing to challenge those fines (Sackett v. EPA);
• Interferance with a church’s selection is not allowed, for its own ministers (Hosanna-Tabor Evangelical Lutheran Church & School v. EEOC);
• The Feds cannot Override state law through presidential fiat (Arizona v. United States);
• Dramatically extend statutes of limitations to impose penalties for acts committed decades ago (Gabelli v. SEC);
• You cannot destroy private property without paying just compensation (Arkansas Fish & Game Commission v. United States);
• There is to be no Imposition of double income taxation (PPL Corp. v. Commissioner of Internal Revenue);
• You cannot limit property owners’ constitutional defenses (Horne v. USDA); and
• One cannot drastically expand federal criminal law (Sekhar v. United States)

And in these cases, the President lost every… single… Justice. A rare feat, considering the progressive history of the SCOTUS over the last 90 years, they ruled the administration could not:

This is not the first time a president has stepped out of line. In fact, if this was 1936 we would be irate over Franklin Roosevelt’s infamous war against the Supreme Court, so much that he even attempted to change the way the Supreme Court was structured so they would stop halting his legislation. He made a total of nine nominations to the court over his 4 terms, with the last in 1943. In fact, it wasn’t until the appointment of a dedicated progressive, House Representative Hugo Black in 1937 that the SCOTUS turned in his favor. The parallels with President Obama are fascinating. But the court was doing it’s job, for the most part.

“By evasion and subterfuge he has usurped the functions of Congress. By the appointment of puppet judges he has taken over the judicial power of today and he is denying the people of America the four freedoms which he proclaims are essential. In my humble judgment we should impeach the President of United States for his unlawful and unconstitutional acts.”

These words were the war cry of Rep. Clare Hoffman (R-MI), but they could be taken off of countless social media threads today. Many leaders talked of FDR’s impeachment, but his popularity among the people made it political suicide. Instead, the 22nd Amendment was drawn up and passed by Congress in 1947 so that no president could serve for more than two terms ever again. It was ratified in 1951.

Internment of 60,000 Japanese, sale of munitions against an act of Congress and many other things made for intense debate then. Today, unilateral changes to Obamacare, recess appointments, spying on americans and engaging in wartime activities have equally riled up the base of conservative thinkers and movers.

But impeachment has been reserved to three times in history for a reason – it is almost impossible to disentangle political elements from it that make the opposing party lose moral and intellectual high ground, and, ultimately elections.

Before we go off the impeachment cliff, I ask my fellow conservatives to consider a few facts, then the repercussions of such acts.

The President almost always has others do his dirty work, so pinning unlawful acts on him would be difficult in official proceedings.

The Congress is controlled by members of the President’s own party, making any impeachment by the House moot. Even if the GOP wins a fragile majority in November, there will not be enough votes to convict the President and remove him from office.

An impeachment trial would take the better part of a year, countless days that could and should be spent winning the ground game with voters and local elections.

If President Obama were removed, Vice President Biden would become president, making virtually no difference in ideology or leadership ability.

The President just won re-election in 2012, making the calls around that time for removal form office quite silly considering his return to office.

I can relate to the frustration of friends and colleagues and I understand the desire to see this unlawful president removed from office. If SCOTUS decisions were any indicator, the President has lost nearly all of his political capital in liberal circles as well as conservative ones. Even the most dedicated progressive jurists like Ginsberg and Kagen have agreed that this administration has pushed too far to enact a very progressive agenda.

Only 58% of eligible voters showed up on election day in November 2012. 51% re-elected the president in one of the most divided climates in recent memory. There have always been presidents who overstepped their constitutional limits, and there have always been leaders who make violating the rule of law their modus operandi. But we have a challenge to change the minds of those making the votes, not just trying to come up with candidates that get the best turnout.

This is a political chess game like nothing else, and while the short game looks damning, the long term can be won by winning hearts and minds in order to win over their votes. We are slowly winning. The president just had his worst year ever, politically. We have the most conservative SCOTUS bench in nearly 100 years and thanks to the “tea party” revolution, conservatives are more politically active on a local level than ever before.

I oppose impeachment talk as barroom discourse, reserved for the late hours when we insolently draw up fantastical ideas about our “perfect world.” But the world isn’t perfect, and we will always be a nation of differing perspectives. Frankly, if we impeach, we will lose. We cannot simply win more elections by brute force and brilliant strategy, we must find a way to unite enough people behind the idea of Natural Law, the Constitution and small government.

I’ve come to believe that if we spent as much time persuading friends, relatives and co-workers as we have on social media calling for impeachment we would be further along today than we are.

Are we going to be Facebook commandos that burn barns to make noise or special forces that win the propaganda war from the bottom up? I choose the latter. Change the people, change the votes. It worked for progressives the last 100 years, it can work for us if we try.