Tiffany Koehler is a black woman (she shuns the term “African-American”) in Washington County, outside Milwaukee. She is 44, loves Aretha Franklin and worked full time as a Residence Director for the non-profit St. Catherine Residence for Women in Milwaukee. She has served as a member of the Wisconsin National Guard and Army Reserves for 14 years and has a military certificate in behavioral sciences and mental health.

And she’s a conservative.

Koehler is running for the seat in Wisconsin’s 58th Assembly district, being vacated by Pat Strachota who is not seeking reelection. She runs against two other Republicans in a primary this coming Tuesday. While knocking doors and meeting people she is occasionally asked if she’s a Democrat. “I kinda laugh about it and say, ‘no, I’m a conservative,'” Koehler told the JS’ Jim Stingl. A racial dynamic that some in her party have quietly doubted was possible in Washington County. But those perceptions are beginning to fade. Her competitors are Bob Gannon, who is endorsed by the Dairy Business Association and Sandy Voss. Gannon is a business owner and Voss is a Village Trustee in Richfield, WI. Both are in insurance sales.

What makes this race more exciting for some is the potential history behind it. If nominated, she would be the favorite to win the November election, making her the first ever black Republican woman in the Wisconsin legislature. Milwaukee did send a black Republican named Lucien Palmer to the Assembly in 1906, where he served one term. She would be the second history maker in the GOP in as many years, with Assemblywoman Jessie Rodriguez being elected last year as the first hispanic Republican in the legislature. But she has never started conversation talking about race, or the possible history of this election. “I don’t think you should base your votes on making history,” Koehler said.

NO EXCUSES, PASSION FOR HER CALLING

Growing up in Shorewood, Koehler, the daughter of a black father and white mother leaned Democrat. But once she tried to start a pro-life chapter of the Party, she was spurned. She left Democrat circles because, as she says, they are “anti-gun, anti-school choice and anti-anyone who doesn’t drink their Kool-Aid.” She found a home in the local Republican Party.

She also adamantly opposes the Affordable Care Act – a.k.a. Obamacare – and embraces leadership that encourages free thinking and innovation. Furthermore, as she got older her experience in the Army Reserves and education through the U.S. Army Health and Science Academy at Fort Sam Houston gave her a passion to see people succeed through hard work, not handouts. While believing in private counseling and assistance – and making it her livelihood – she has rebuffed the idea that government can solve most problems. Her military certificate in mental health gives her valuable experience at her current job, and she says will aid her as an Assemblywoman in Madison.

Her complicated life began soon after her father returned to his undisclosed family in Indiana when she was a baby and her mother, who at times worked two jobs to support her, suffered two lengthy battles with mental illness. As a result, Koehler spent the first three years of her life and her entire teenage years in 19 different foster homes.

After serving in the Guard and graduating from Cardinal Stritch in 2006 she moved to Slinger. When her mother’s health declined, Koehler spent her last years taking care of her until her death in 2010. From her trials she has developed a passion for meeting the disparities of those in need through the hands and hearts of the private sector.

When asked about her racial background, she jokes, “I was created during the time when blacks and whites were fighting on the 16th St. viaduct, and my parents were underneath the bridge kissing and making out.” But she has not made race an issue in this election, because she believes it is the character of the candidate that counts. “I think the candidate should be elected not by age, race or color,” Koehler said, “but by qualifications and experience.” Even Bob Gannon, her opponent has said, “I think it’s fantastic she’s running. It shows the big tent the Republican party is and should be.”

It is only upon request that she discusses her concerns with her opponents, because she prefers a positive campaign. But on this, she pointed out that her opponent Sandy Voss has voted to raise taxes almost every time it’s been considered. Also, her other opponent, Bob Gannon has a history of legal problems, with three drunk driving citations, the last two resulting in jail time. Both occurred in his twenties and thirties, but Koehler feels this is at least worthy of concern. Gannon refuses to discuss it at all. He has had no legal troubles since.

The three candidates, however, built this primary race upon their respective careers and life experiences and less about personal attacks. And for Koehler, the race provides a fascinating story of redemption from an underprivileged life and how learning from life experiences can shape your beliefs.

As for politics, her nuances are not immediately clear but she has great respect for several Republicans that give you a glimpse into the kind of philosophy she has. When asked, her favorite leaders are Govs. Rick Perry and Scott Walker. She believes strongly in the rule of law, and in encouraging people to pick themselves up and not make excuses for the life they were born in. She supports open education policies like School Choice because it is the right of parents to choose, is an avid opponent of abortion and also supports Voter I.D. laws. On top of this, she opposes Common Core State Standards and believes that educational decisions should be made as locally as possible.

So what makes her different than the others?

The main issues she has run on are transportation reform, taking care of her fellow veterans in the armed forces, and of course lower taxation. “I do not believe the state should raise taxes and I will work hard to reduce the tax burden on working Wisconsin families and small businesses.  The best way to do that is to eliminate wasteful government spending and if elected to the Legislature, I will demand responsible, balanced budgets.”

Sounds pretty conservative, and very common in the District 58 race.

Perhaps her most ardent criticism is about the transportation budget in Madison, which she says is fraught with needless waste. “They think money grows on trees,” she said of the state DOT. She points to one example – a $1.2 million “repair” of Hwy C in Washington County. While entrenched road builders approve of such things, she doesn’t feel the project is needed at all. She has supported the local Highway J landowners group that has stymied the WISDOT in federal courts more than once on several highway projects, including part of the Hwy 164 expansion.

She also noted that the DOT is looking for an appropriation of $980 million in the next budget, making it a prime target for reform, prioritization and possible cuts. Her grasp of the nuances in Washington County are what set her apart from the others in her race, and she hopes that is enough to propel her candidacy forward. 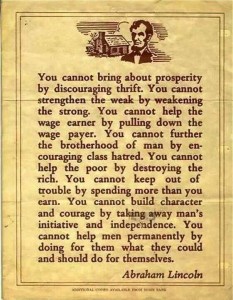 WHAT REALLY CAN CHANGE MADISON

To Koehler, at the end of the day, waste, fraud and abuse are important, but politics are about people. And on that, she sees herself as distinctly qualified. “I consider myself a compassionate conservative. By that, I mean I want people to share their God-given talents with the world and not be dependent on government.”

One of the problems plaguing faint Republican outreach into urban districts is the perception that they don’t care about the plight of people in need. Of course, this isn’t true, but Koehler is one of the few that emphasizes – and lives out – the solution: her belief that the private sector, and those of faith have a calling to fill this need.

With her primary race coming up in 5 days, Tiffany Koehler has waged a clean campaign based on strong values and the power of her personal story and ability to bring positive change not just to Madison but to a Party in need of a message that not only appeals to more voters, but works.

Whoever wins Tuesday night in the District 58 primary will surely be a staunch conservative, but Tiffany Koehler is hoping for the chance to make an historic difference in our state. And not because of the color of her skin, but the content of her lifelong passion – to see neighborhoods rise up to help one another and for government to lead by setting the example. She believes in strict financial responsibility and encouraging self achievement above shallow self-help policies or dependency programs that only dress political windows but never solve urban problems. Her message could be a winning one.

Primaries are determined entirely on name recognition and voter turnout, and if Koehler hopes to win this race, she will need every single one of those she has won over this primary season to turn out at the ballot box and chart a course, not just make history.