Last month, a study sponsored by Wal-Mart found numerous indicators of the company’s effect on the U.S. economy, both good and bad numbers. It seems that no matter how successful an American company is at 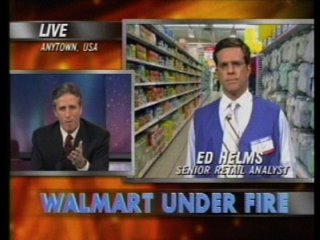 achieving profitable status and market domination, the children of the Entitlement Mentality will always pursue the “evil angle” and potential demise of this institution, unless of course that institution gives them a hand out. But nonetheless, Wal-Mart has pushed on and succeeded in not only saving consumers money on every day items, but due to the sheer size of the company, have to a greater scale, affected the entire nation in a positively financial aspect.

After a rant or two, I have to rave about an authentically American institution, a cultural beacon of corporate brilliance that has both its flaws, but also its values.

In the face of tyranny, a push against the grain
There is an entire generation that feels like everyone should have a chance to get ahead. For sure, nearly every level headed American believes that life, liberty and the pursuit of financial happiness is an American value. Yet we’ve perverted that value of life, liberty and happiness into something of a selfish, vicious circle of a game where King of the Mountain is obligated to furnish the hand-me-downs to a tyrannical mob just waiting for its turn to take a beating.

Wal-Mart was started by a former JCPenney employee who had a degree in Economics from the University of Missouri, earning just $75 a month. The ball started rolling when Sam Walton purchased a department store in 1945 for $20,000 using $5,000 he had saved from his military service as collateral. He began experimenting with his someday Wal-Mart principles early on, offering central location, longer hours, special discount pricing (by buying right from the manufacturer), and offering a wide assortment of goods. Soon his store (A franchise of the Federated Store family) led the six state region where he was located in sales. So successful was Walton in his management that everyone wanted in on the action. When Walton’s lease was up in 1951, the landlord refused to renew the lease because he wanted the store for his son. So Walton used it to his advantage, selling the store for a $50,000 profit!

Sam Walton had already been planning ahead and had purchased a small 5 and dime in Bentonville, Ark which was also a chain of Ben Franklin/Federated Stores. He staged a “Remodeling Sale” and introduced his new store to the community. It was just as successful as his first store, and soon he opened another 5 and dime in Fayetteville, 20 miles away. Serving on the Rotary Club boards, the City Council, starting little leagues for the kids, he began to branch into nearly every area of pubic life in his little local town. And when he opened up his new store, he began to do something aggressive: he began to nose around in other stores to find talent to manage his business! He did, and offered competitive salaries and managed to build a successful team with vision and values. From the very beginning Sam Walton offered profit sharing and benefits to his employees, something that most businesses did not offer at that time. He valued his employees and knew they were the key to his success. (Don Soderquist, “The Wal-Mart Way”)

Soon after, by the mid 1950’s Walton, with the help of his brother, brother in law, and father in law had opened a couple more store from Kansas City to Arkansas. He opened his first Walton’s Family Stores, and by 1962, with 16 variety stores in tow, he opened his first store named “Wal-Mart”.

Over the years, Wal-Mart slowly and quietly applied it’s principles to foster consistent growth and stretch ever further across the nation and press prices further down. By 1965, he employed 250 people, and by 1975 the operation had grown to 6,500 employees and over 200 stores. By 1980, Wal-Mart was selling more than $1.2 billion in merchandise at prices lower than any of it’s competition: K-Mart, Sears, JCPenny, etc. 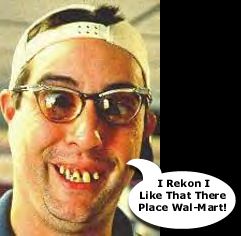 By 1990, Wal-Mart had 275,000 employees, 1,528 stores with over $25 billion in sales, and it was only beginning! By 2000, Wal-Mart had increased its sales to $165 billion a year, making it the world’s largest retailer by far; larger than Target, Sears or K Mart combined. in the four years on the books since then, the company has seen more than 1,000 new stores push it’s revenues to over $260 billion, saving the American consumer over $12 billion a year. Even Warren Buffet, greatest investor in history recognizes the positive effect of Wal-Mart on the overall health of the U.S. Economy: “You add it all up,” says Warren Buffett, “and they have contributed to the financial well-being of the American public more than any institution I can think of.” (Fortune, 3/03 “One nation Under Wal-Mart”)

Sam Walton died in 1992, but he left behind a legacy that despite what the critics say, has valued his employees and his customers. I would agree that a few lessons could be passed on from Sam to his successors, such as his tendency to visit stores at random and talk with various ‘associates’ about their jobs, the environment they worked in, and how many people they smiled at that day. But nonetheless, Wal-Mart today stands above many employers, in that it offers health insurance to all it’s part time employees, profit sharing and upward mobility to it’s managment and offers academic scholarships and encourages further education to those who have the unction to reach higher. The only reason Wal-Mart gets the brunt of the hostility is it’s size, the scale by which the company is measured. People figure that a company that earns billions should be forced to give those billions away to its employees, but the drug store owner down the street could make 15% off the candy bar you buy from him, and won’t hear a peep from the unions now will he? What hypocrisy!

Some believe that Wal-Mart is driving down wages while it beats prices down to almost nothing. In fact, it has contributed to a lower “average” wage, primarily for the lower income, illiterate class (which ordinarily may be out of a job entirely, by the way). According to studies by Global Insight, researchers found that the world’s biggest retailer accounted for nearly 210,000 net jobs last year while driving nominal wages down 2.2 percent. On the other hand, however, lower wages (which are still significantly above minimum wage in every state) have lesser effect on the economy when prices are either kept flat or even pressed lower.

Making 98 cents this year compared to $1 last year means little or nothing if what you’re buying costs less than 97 cents, when it used to cost $1. Does this illustration make sense?

Because consequently, the same study found that The world’s biggest retailer also lowered consumer prices by 3.1 percent, and real disposable income was 0.9 percent higher than it would have been in a world without Wal-Mart.

In the eyes of Wal-Mart’s detractors, the chain embodies the worst kind of economic exploitation: it pays its 1.2 million American workers an average of “only” $9.68 an hour, doesn’t provide most of them with health insurance (because they choose not to pay the $20/mo for it), keeps out unions, has a checkered history on labor law and turns main streets into ghost towns by sucking business away from small retailers.

But…
McKinsey & Company did a research a few years ago, concluding that Wal-mart contributed to at least 12% of the entire productivity gains in the years 1995 to 1999 alone. Quite a significant benefit for one company to have. The least of all accusation against Wal-Mart is that it is ripping off the American public, a general standard of bad or good business. So the enemies of personal responsibility and free-markets have to find 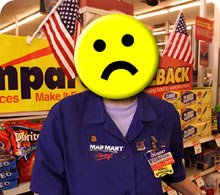 something else to criticize. And wages are the golden key to them. Yet, when prices are held in check, and inflation is almost singlehandedly harnessed to historical lows by one company looking to both make a buck and benefit its community, how can someone complain?

“By now, it is accepted wisdom that Wal-Mart makes the companies it does business with more efficient and focused, leaner and faster. Wal-Mart itself is known for continuous improvement in its ability to handle, move, and track merchandise. It expects the same of its suppliers.”

In 1992, Sam Walton received the Medal of Honor from President George Bush, and to the nation he stated, “We’re all working together; that’s the secret. And we’ll lower the cost of living for everyone, not just in America, but we’ll give the world an opportunity to see what it’s like to save and have a better lifestyle, a better life for all. We’re proud of what we’ve accomplished ; we’ve just begun.”

Just because a man’s dream became a reality doesn’t give a person the right to claim their part in the success with no merit to stand on. If you want to make more for your effort, increase your skill, move up the ladder, become management, use your money wisely, invest it into the fastest growing retailer in history (30 years running) and buy yourself a little house and stop complaining that the rich don’t give you freely what they worked so hard to get in the first place.

In short, Wal-Mart’s only debt to America is that it allow its principles to flourish more abundantly, not that it be held against the wall and shaken down for the few pennies it makes off your bubble gum.