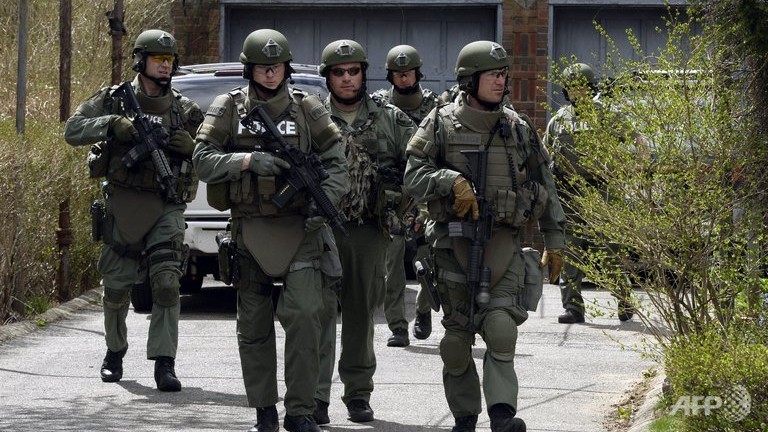 THE STORY OF THE MAIN STREET WAR

After gathering signatures, and forcing another public hearing, the city council approved the purchase a month later. Keene now is the proud owner of a Lenco “BearCat,” fitted with thermal imaging, radiation and explosive gas detection systems, gun mounts and rotating hatch.

On the application for the grant, the city noted it hosts an annual marathon and pumpkin festival. Just in case terrorists or organized crime targets Keene, they’ll be ready.

Because of the drug war, local agencies, along with the National Guard have been given tasks they never had to assume before, and as the criminal elements have become better armed, they too must bulk up their defensive and offensive forces. Police chief, Tim Longo, of Charlottesville believes some of the equipment is necessary, yet emphasized their department modifying their 12 rifles from automatic to semi-auto. “We really didn’t see a need to have fully automatic weapons in an urban environment,” he said. But some locations boggle the rational mind as to why they need quite so much firepower. Rockingham County, Virginia has received a grenade launcher, and Culpepper County, a mine-resistant vehicle. Augusta County has stockpiled 154 military rifles, the most of any single agency. It’s largest city, Staunton has 23,000 people and is literally a throwback Mayberry today.

Whether you’re in Fargo, North Dakota, Fond du Lac, Wisconsin or Rising Star, Texas you are likely the recent recipient of some of the military’s best weaponry, and the latest subject in wasteful federal spending lavished across the nation. Is this really the best use of our surplus equipment and “grant” money? 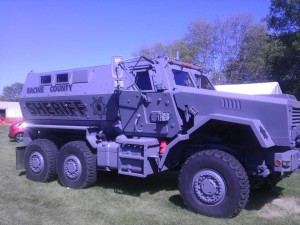 In journalist Radley Balko’s preeminent study, “Overkill” he details instances where this blending of two worlds has resulted in unfortunate circumstances. Rights have been violated, thousands have been scared beyond belief and in some cases innocent people have died. Balko does a great service in digging deeper into the issue through a book called “Rise of the Warrior Cop: The Militarization of the Police Forces.” The primary users of 1033 acquisitions are S.W.A.T. forces.

Since the local proliferation of military equipment and tactics we’ve seen the use of these heavily-armed S.W.A.T. forces explode by several thousand percent and the number of mistakes made to skyrocket. S.W.A.T. teams were used sparingly until the 1980’s, and usually just for high-risk scenarios like hostage or bank robbery situations. Today they are used thousands of times per year, and for non-violent raids. Fortunately, it’s not as awful as it may sound. So far. One study in Baltimore sounds better upon review: of 806 raids, 545 resulted in police forcing their way into homes, which led to 485 arrests but only five instances of discharged firearms. Seven injuries resulted, but no one was killed. That is a pretty difficult stat sheet to maintain for an urban police force. But other instances, from Sunrise, Florida to Omao, Hawaii show the danger of such militarized forces being used more casually. Screw ups happen. And rather than a simple mistake, they become the equivalent of a paramilitary invasion, provoking a violent, terrifying reaction from citizens. The city of Sunrise alone has typically had only one murder a year, but they have a S.W.A.T. team. Why?

THE COST OF FREE

What is our obligation as a people, in being secure but also free? Benjamin Franklin is credited with saying, “a great empire, like a great cake, is most easily diminished at the edges.” He also is attributed the line that says trading essential liberty for temporary safety leaves you with neither. Today, our cities and countryside are the edges of the progressive complex. Where there are less regulations, responsibility and a grasp of liberty is stronger. But the Trojan Horse is voluntary concession, and it happens everywhere. And I believe that the gradual homogenization and militarization of our law enforcement agencies nationwide is not unlike the subsidization of farmland and their villages. In the world of politics, he who holds the money holds the power, and power lies in blending ideologies. There’s a reason Iowa is the first state for both major parties. Once you’re dependent on a revenue source, compliance is not something that needs to be forced. Servitude is never far from being voluntary. And now, our law enforcement and armed forces are becoming the same thing, with support of federal dollars.

Police are required to observe the balance of keeping the peace while regarding the constitutional rights of everyday Americans. The fourth amendment reads:

The right of the people to be secure in their persons, houses, papers, and effects against unreasonable searches and seizures, shall not be violated, and no Warrants shall issue, but upon probable cause, supported by Oath or affirmation, and particularly describing the place to be searched, and the persons or things to be seized.

Observing the protection of these rights becomes more difficult in an environment where officers are trained to react quicker, equipped to do so with brute force and given an even greater power over life and death than they had before. Mankind was not designed to handle the conflicting nature of combining constitutional rights and ethics with the realities of an unpredictable battlefield, and to require it of our officers is not just overkill, it is unnatural. War is hard enough on the mind; subjecting officers to such standards is arguably irrational. Imposing that dynamic on the citizenry is terrifying.

Voltaire once said, “it is better to risk saving a guilty person than to condemn an innocent one.” Many do not find it a worthwhile risk in a civilized society. It may be harder to publicly sell, but historically it is better to have the threat of danger in a free society than the suppression of safety in a monitored and controlled one.

It is still true that in order to be truly free, we need some government. Criminal elements must be met by a police force that is both swift and strong. But as a society, we must evaluate context and results, and accept when it’s too much. Large urban areas like Chicago, Los Angeles, Miami and New York City have public safety needs that clearly do not match those of Keene, NH or Neenah, WI. So then, why do they need to look, act and feel the same as those larger cities? The fact that Fargo, N.D. has one or two MRAPs is not as concerning as it looks, because such tools could never effectively bring the citizenry under its control. They are disproportionate to the need. But if we’ve managed to distribute tens of thousands of assault rifles, thousands of military combat uniforms along with a thousand helicopters, tanks and aircraft in just 17 years, where will we be in a few more years? And now, with the proliferation of unmanned drones, could mistakes be even more commonplace? The cause for concern becomes more legitimate when this becomes the norm, and people understandably become more suspicious of their government when they begin to look more like a solider than a police officer.

The Founders wrote our constitution with a clear bias toward liberty over safety. We too must be able to react both swift and strong when abuses occur, and they have in every civilization through recorded history. The second through eight amendments are almost the entire Bill of Rights, and deal with restrictions on the government and the manner of protecting civil liberties. They were obviously a great concern.

If asked to forsake their duty, I believe most local police do their best to honor these rights and refuse to facilitate a totalitarian government. I don’t even believe most of the military would stand for such behavior. They swore an oath and are usually more aware of the constitution than the men they work for. But that does not mean that we should sit idly by as the federal government implements top-down emergency preparedness plans to mobilize and implement an authority structure that supersedes our own here. There is a balance to having a responsible approach to natural disasters like Hurricane Katrina or terrorist acts like those on Sept. 11, 2001. But our predisposition toward overkill began before the events of 9/11.

I understand the resistance to more roadblocks and transparency comes from a desire by police to do their jobs effectively and safely. But the risk should not be raised on one in the name of eliminating it on another. We are not in a state of wonton violence and free-for-all criminality.

Planning for the worst and hoping for the best is good leadership, but turning our constabulary into an intimidating, wartime paramilitary force is both impractical and statistically unnecessary. Our local police should be a representation of our community. I can accept that a city such as Milwaukee, WI could use a couple of military vehicles or a helicopter for prosecuting its war on crime, which is among the worst in the nation. It has 1.2 million people and a large urban center with dozens of homicides a year, bomb threats, drug wars and gang problems. But if Jefferson County, WI receives the same equipment, training and conducts raids the same way I’m going to have a problem with it. It just depends where you live.

Here in Racine County, Sheriff Schmaling used the 1033 program to acquire an armored vehicle that had been sitting idle for eight years in California. Our County is anchored by the city of Racine, an industrial community of 80,000 people with a history of drug and higher crime. He is a deeply conservative man but insists that such tools are necessary for our area. During a recent mass shooting at a Sikh temple in 2012, Schmaling sent the vehicle to assist neighboring Oak Creek. “If you’ve seen the active-shooter (mass killing) in Oak Creek…we certainly hope it doesn’t happen here,” he said. “But if it does, we’ll certainly be ready for it.”

Each area has its own needs, and as long as police forces acquire proportionate equipment and training based on local circumstances, I believe voters will agree with it. Together, they know best how their governments should operate. What I fully reject is the presumption of supremacy by the federal government, both in its implementation and mobilization. To me, this is our greatest national security concern beyond anything that terrorism threatens.

Mayberry may be a future battlefield, but I don’t accept the notion that it must look or act like one now. Even still, America’s 1033 program may not the problem. Neither is healthy caution.

PLEASE HELP PROMOTE THIS POST BY LEAVING THOUGHTS BELOW