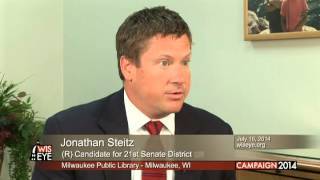 After about 11 days of uncoordinated, but effective response from the conservative base about the contentious 21st Senate District primary, and one day after the largest hit of them all, from radio show host Charlie Sykes, Jonathan Steitz has issued a mea culpa of sorts. I am obligated to hear him out, and take him at his word, but my cynicism isn’t entire baseless. Via RightWisconsin two days ago: (Hit the *stop* button on your browser as it loads before the paywall hides the story)

Editor’s Note: On Wednesday we published this story about some of senate candidate Jonathan Steitz’s supporters. The story set off a flurry of reactions between Team Steitz and supporters for former senator Van Wanggaard. Some of the harshest and most personal attacks came from the subjects of the story, Steitz supporters Michael Murphy and Tamra Varebrook.
In an email Thursday afternoon, Steitz wrote: “I regret the reaction from Tamra this morning – that was uncalled for and hurtful to both you personally and my campaign.  I and others have attempted to reach out to her with no success.”   Steitz asked Right Wisconsin to publish the following statement:

Burlington, WI — I’ve always believed politics is well-served when it is fueled by candidates with high-integrity and great passion for the issues seeking office, setting a tone for their campaign that encourages a civilized debate on the differences among key issues. In seeking the GOP nomination in the 21st Senate District, I’ve tried to set such a tone since day one, and I trust my opponent, Van Wanggaard, has done the same.
I can say with great confidence that Van and I share similar motives for running, and while we may view key issues very differently, both he and I have a desire to provide the best representation for the 21st district and Wisconsin.
Unfortunately the tone of the campaign has all-too-often devolved into one that is personally destructive and falling short of the integrity I believe both my opponent and I exhibit.
My opponent is a veteran of one of the more bruising campaigns in recent history, and in my effort to unseat Sen. Bob Wirch, the ugly side of campaigns was ever-present.   When I decided to run for the 21st Senate District I stated that I would treat this campaign like a job interview – making the argument based on issues why I am the best candidate to represent the 21st District. I trust that Van has a similar view of campaigns.
With less than three weeks until election day, I am asking supporters of both candidates to refrain from personal attacks by and on supporters via all mediums and focus on the differences in issues that should be framing this race. I respect both the character and integrity of Van, and believe it is time to focus on issues that are important to voters.
I ask that Van consider making a similar public appeal to his supporters, helping ensure that the final weeks of this primary campaign allow a discussion of key policy differences and not a defense of personal attacks leveled by and on supporters.
Finally, in an effort to demonstrate a strong commitment to educating the voters on the differences that my opponent and I have on key issues, I believe Van and I have an obligation to engage in at least one more debate before August 12th.
On August 12th, the next Senator of the 21st will be elected. Regardless of the outcome, I think the district is best served by having voters make their decision in this election based on a vigorous debate of policy issues.

Unfortunately, it’s hard to embrace this last minute call for civility and honesty when Steitz was confronted about this months ago regarding senior levels of his volunteer staff and yet continued to embrace them. “I can’t control them” he said. His social media and website continued to feature several people onsite who were the persistent, angry and vile antagonists off-site. Other fringe, radical folks seemed attracted to these people and it grew exponentially.

Honestly, I don’t believe Van Wanggaard HAS to “make a similar public appeal to his supporters,” because we didn’t do anything unseemly or low brow. It’s a subtle, but inaccurate implication.

The timing of this piece – coincidentally – comes one day after Charlie Sykes was the LATEST of five writers in a week to shed light on these supporters, and is suspect to say the least. I APPRECIATE THESE CALLS FOR PEACE, considering these proud #TeamSteitz organizers have called out the children of me and my friends (by name), dug into our personal homeownership records, court history and voting records and attacked us on things ranging from ex-spouses to threatening our reputations/jobs/small businesses. We’ve gotten calls from prank complaints about crimes that never happened to midnight phone calls from who-knows, threatening our businesses and various other behavior only stooges could perform.

The entire time, Van Wanggaard’s supporters barely lifted a finger in retaliation or proportionate rhetoric, except the occasional slap at these horrid attacks. Did any of us do this? No. To repeat: I love any call for civility and good competition, but I have probably become too cynical after this primary.

I hate to sound like the doubting one, considering a friendly contact sport (like Milwaukee’s District 4 race) is all I’ve been hoping for, but I don’t buy this last minute sincerity at all. While opposing the Steitz campaign, I always respected him personally, until the recent RPW convention in Milwaukee. I received two midnight texts/phone calls from two men who don’t know each other, reporting that Jonathan was openly questioning my faith and character because of behavior he only alluded to, but never described. I later heard similar claims from a third person. Who does that? Certainly not the man who wrote the piece above. Not one hoping for future teamwork and electoral success.

These calls COULD have come in April when one of his top aides threatened the placement of my child by claiming repeatedly that I leave him in bars late at night. It COULD have come this March when another one of his prominent volunteers suggested my parents should have abandoned me at birth. Or this last winter when one of his supporters went on a profanity-laced tirade against Rep Paul Ryan, and Assembly Speaker Robin Vos. It could have been at any point in the last year while Mr. Steitz’s friend Brian Sikma posted stories about Van supporting Democrats, which never happened.

Instead, Steitz threw his hands in the air. For too long, he has been silent while these attacks have occasionally stuck to the wall, before falling off in shame. How can I believe his sincerity now, when his campaign oddly issued a press release with the full text of two *anonymous* articles written by one of these operatives, only FOUR DAYS ago? Did Steitz not have control of his press release team, either?

There is literally such a tide of instances, it’s almost distracting and counterintuitive to discuss them. But frankly, I’ve had it. This latest call feels like a bottle of hot water after a long race. I’m trying to be sportsman-like. But am I the only one scratching my head?

Perhaps the massive backlash against his supporters on the ground and in the press for falsifying and brutally attacking the character of Wanggaard and his supporters is finally having a positive effect. Perhaps I’m wrong, and Jonathan Steitz is trying to rebuild some of the bridges he watched, and helped burn for months. Perhaps his plausible deniability is turning into genuine seriousness.

Hopefully, Racine County politics can begin to mend and move on to victory in November. I can only hope that my cynicism can turn into teamwork on August 13th, when we can finally put this primary behind us and get back to what we used to do best: beat Democrats with a better message.