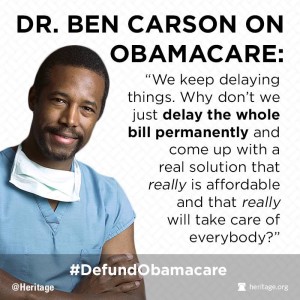 The federal Court of Appeals is not known for strict adherence to the constitution, but frequently has it’s moments of clarity – like interpreting what a law says, rather than what it meant to say. The Affordable Care Act was written poorly in it’s haste and breadth, so it stated that federal subsidies could only be used in healthcare exchanges that are state-run, not federally run.

The Court agreed today, ruling 2-1. This means, ironically, that the majority of states under the federal healthcare exchanges do not qualify. The law shot itself in the foot.

It’s almost too good to be true. 2/3 of the entire country just lost the hundreds of billions in subsidies that made “Obamacare” work in the way it was intended. The law is literally “collapsing under it’s own weight,” as Rep. Paul Ryan (R) said.

Fox News reported this morning that the decision is likely to be appealed, but threatens to destroy the parts left of the law after several court decisions, affecting millions of members.

The suit maintained that the language in ObamaCare actually restricts subsidies to state-run exchanges — of which there are only 14 — and does not authorize them to be given in the 36 states that use the federally run system.

While the dissenting opinion declared that this was “an attempt to gut the Affordable Care Act,” the majority opinion had the audacity to rule that the law actually limited itself.

Their opinion read, “We reach this conclusion, frankly, with reluctance. At least until states that wish to can set up Exchanges, our ruling will likely have significant consequences both for the millions  of individuals receiving tax credits through federal Exchanges and for health insurance markets more broadly.”

Go figure, reading a law for what it says, and not what you think it says. The horror.

Courts are ruling strictly, rather than actively, and getting the blame for…. what? Literally reading the law?

Here’s a tip: next time, just KEEP YOUR HANDS OFF MY HEALTHCARE.