After a slew of Conservative writers came out this last week against the behavior of local reporting outfit, MediaTrackers, they appear to be promoting a site run by liberals to defend their actions.

Started in 2011, MediaTrackers became a favorite tool of us Conservatives in Wisconsin for exposing liberal media bias, big government, wasteful programs and finding wonky research. But in the last 3 years, after multiple journalist mistakes and misleading stories, they’ve broken protocol and delved into several GOP primaries across the state with traditional mudslinging. This left a bad taste in the mouths of many, who called them out as hypocritical and unaccountable. 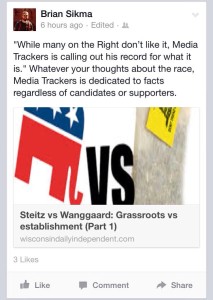 Today, however, another local operation, called Wisconsin Daily Independent released an op-ed by an anonymous writer about the “grassroots” coming to the aid of Jonathan Steitz, one of the candidates in Senate District 21. The primary is August 12. It should be noted that this “grassroots” is entirely from outside the district in question, and that independent conservatives in the district overwhelmingly have favored or joined the team of Van Wanggaard. WDI is a branch of a larger media operation in Arizona, American Daily News Network, run by a woman named Lori Hunnicutt. Local Racine entrepreneur Paul Bruno is listed as their national editor. In this op-ed, “Linda Richards” defended MediaTrackers as a “conservative watchdog” going after one of the candidates, Van Wanggaard, allegedly as being “squishy.” [Note: Van Wanggaard was recalled from the same seat in 2012 for being too conservative according to some.] Media Trackers then posted this story on their social media walls. (See attached pic)

Before today, no one had ever heard of “Linda Richards.”

The site has several op-ed submissions from both sides of the conservative/liberal dynamic, but their management team is decidedly not conservative. In fact, the owner of the group of sites is a well-known Arizona progressive, who even proclaimed it herself recently on the Glen Beck Show.

Arizona Daily Independent is the mother site of the growing operation, and Arizona State Senator, Frank Antenori (R) has pointed to Hunnicut’s “special liberal perspective.” No fan of their ways, locals have called them out for their attempt to appear balanced and unbiased, but have been anything but that. Some have pointed out obvious infractions like plagiarism and smear campaigns. She has been behind some vicious attacks against independent conservatives and tea party candidates as well. Sound familiar?

While there is certainly nothing wrong with conservatives using stories from sites owned by liberals (I have done it myself), these two organizations make strange bedfellows in Wisconsin politics. Especially since MediaTrackers has proclaimed themselves the arbiters of local media accountability. You would think they’d have done their research – as alleged researchers – of the group’s ownership before such a proud embrace of this piece. This wasn’t just a news story, it was an op-ed, written by an unknown name without any previous authorship, defending MediaTrackers… who then reposted the story right afterward. In the midst of recent backlash the timing is perhaps coincidental, but intriguing. The actions of Lori Hunnicut and her management team both on and offline brings into question why MediaTrackers sought out their article in the first place, then posted it online for thousands to read. Especially since the WDI site is not a major publication and has less than 300 social media followers itself. There is a bit of a parallel between the accusations toward both, so maybe there’s more depth to it than meets the eye.

Either way, it appears that as of right now, liberals may be the only ones defending MediaTrackers. Perhaps that’s the kind of ironic “accountability” they need to get back on “track.”