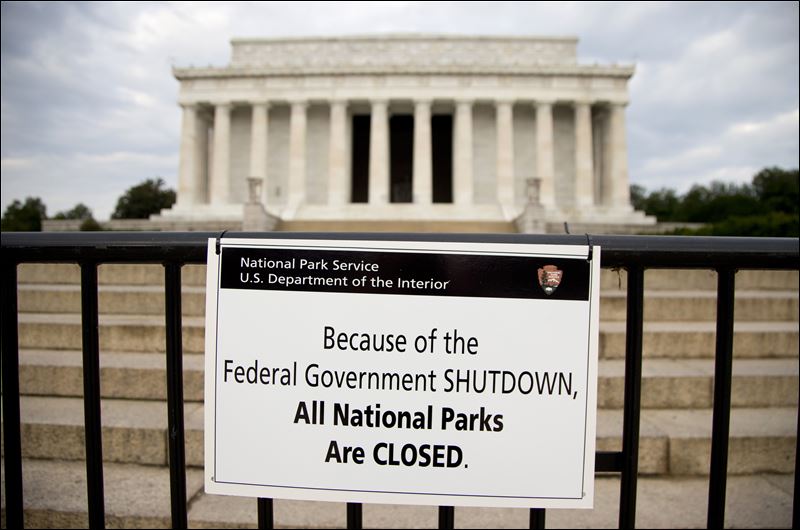 The current budget battle and government shutdown descended upon us amidst a terrifying barrage of rhetoric from the Democrat party acting like petulant children, with cries about employees being sent home, families being hurt, and agencies being shuttered.

All essential services of the government are shuttered. And that’s quite a loaded term. See, according to the Constitution, the “essential functions” of government were all of them. Because Government was never supposed to have any functions that WEREN’T “essential.” Before discussing the false narrative that Republicans are “holding the economy hostage” or “the minority party whining about one law they don’t like,” I want to establish some common understanding regarding those “essential services” of the Federal government, just for context:

Congress is granted the following eighteen enumerated powers, as defined in Article 1, Section 8 of the United States Constitution:

· To collect taxes and duties;
· To borrow money on the credit of the United States;
· To regulate Commerce with foreign Nations, and among the several States, and with the Indian Tribes;
· To establish an uniform Rule of Naturalization, and uniform Laws on the subject of Bankruptcies throughout the United States;
· To coin Money, regulate the Value thereof, and of foreign Coin, and fix the Standard of Weights and Measures;
· To provide for the Punishment of counterfeiting the Securities and current Coin of the United States;
· To establish Post Offices and post roads.
· To promote the Progress of Science and useful Arts, by securing for limited Times to Authors and Inventors the exclusive Right to their respective Writings and Discoveries;
· To constitute Tribunals inferior to the supreme Court;
· To define and punish Piracies and Felonies committed on the high Seas, and Offenses against the Law of Nations;
· To declare War, grant Letters of Marque and Reprisal, and make Rules concerning Captures on Land and Water;
· To raise and support Armies, but no Appropriation of Money to that Use shall be for a longer Term than two Years;
· To provide and maintain a Navy;
· To make Rules for the Government and Regulation of the land and naval Forces;
· To provide for calling forth the Militia to execute the Laws of the Union, suppress Insurrections and repel Invasions;
· To provide for organizing, arming, and disciplining, the Militia, and for governing such Part of them as may be employed in the Service of the United States, reserving to the States respectively, the Appointment of the Officers, and the Authority of training the Militia according to the discipline prescribed by Congress;
· To exercise exclusive Legislation in all Cases whatsoever, over such District (not exceeding ten Miles square) as may, by Cession of particular States, and the acceptance of Congress, become the Seat of the Government of the United States, and to exercise like Authority over all Places purchased by the Consent of the Legislature of the State in which the Same shall be, for the Erection of Forts, Magazines, Arsenals, dock-Yards, and other needful Buildings; And
· To make all Laws which shall be necessary and proper for carrying into Execution the foregoing Powers, and all other Powers vested by this Constitution in the Government of the United States, or in any Department or Officer thereof.*

(*This last power is the so-called “elastic clause” that vaguely states that laws may be enacted based on the other 17 powers. This is an open-ended phrase that has brought the Federal government into conflict with states and citizens over the expansion of its regulatory power.)

Anything beyond these 18 enumerated powers, and the laws necessary and proper to execute THEM (not anything else) are unnecessary and unconstitutional.

THE PEOPLE’S HOUSE
The Founders were brilliant enough to understand the impact of democratic “mandates” and the proper balance needed between the three branches of government. They knew, according to history that judicial, legislative and executive power are all prone to abuse and in the hands of flawed men could become weapons to liberty.

When representatives in any branch are elected or appointed, they do so on usually broad terms or sets of principles. And those factors ebb and flow on popular culture and winds of change. The role of the media in moving these winds is certainly a very valid concern, but outside the scope of this discussion.

In relation to our current budget debate, we must go back at least 13 years and look at some context behind elections, and determine what a “mandate” really means and how important it is.

In 2000, George Bush was elected and in 2001 he became President. He had a split Senate 50-50, and a Republican-controlled House 229-205-1. The argument could be made the nation was very “republican” at that time. Then 9/11 happened and party identification didn’t matter. Nonetheless, by 2004, Bush had the pleasure of gaining 1 seat in the Senate and maintaining increasing the House to 232 Republicans. Even further, the nation continued to elect more Republicans and in 2005, the GOP had 55 Senate seats and maintained approximately 230 seats in the House.

What did the Republican majorities do with their power? Nothing great. Again, that’s another post. But we know that in 2006, the Democratic Party leveraged a very unpopular war to reverse course and take over Congress, sweeping in with 233 seats in the house and turning the Senate into an equal share again.

They considered their election a mandate against Bush. And in 2008, they successfully gained the Presidency back against a very weak candidate in John McCain. Mandate declared again!

The Democrats took great advantage of this and passed enormous reforms that changed the economic and political landscape. Between Dodd-Frank, Mortgage bailouts, buying Chrysler, GM and AIG, stimulus and others, their crown jewel was Obamacare. Such a mandate they had, that the Democrats passed this massive law 219-212, with 34 Democrats joining every Republican in voting against it.  Even that vote required a lot of shenanigans.

Meanwhile, Tea Parties created during the stimulus debates revved up and showed up in the next election, with the health care law being the primary motivation, sweeping over 80 new Conservatives into office for the first time, and churning over Congress in an historical election not seen in at least 80 years.  The House swung by 44 votes the other way, and the GOP suddenly had a HUGE majority not seen in decades.

Since then, the GOP has held onto it’s majority in the House and chipped away slowly at the Senate until now. The House current sits at 233-200 (2 vac), and the Senate at 55-45.

Here we are, 4 days into the implementation of Obamacare, and the only thing Democrats have to support their argument is that Obama was re-elected against another weak candidate, with far less than his first election (Bush, its worth noting had a larger margin of victory his second term).

BACK TO OUR ROOTS

The Founders put into place a government that utilized the best of historical lessons in ancient government. They created a House of Representatives (a democratic voice every 2 yrs) and a Senate (the voice of the states every 6 yrs), and a Presidency elected by states in republican every 4 yrs.

The architects of the Constitution understood that prevailing winds of change must be constrained by the slow-moving Senate and a Presidency that was in control of the functions of government itself.

What we are currently facing is a twice-affirmed voice of the people (the House) putting a stop gap on ever-shrinking remnants of the LAST voice of the people. On principle, Obamacare is a horror story, and is dangerous. But the law was written in such a way to avoid its effects from affecting the presidential election. Nonetheless, 30 states today have Republican leadership, 20 have Democratic leadership. In 26 of those states, there are universal Republican leadership, in legislative and executive branches. It’s clear that we are a center-right country by any stretch.

So it is disingenuous at best to say that because the nation re-elected Obama last November that Obamacare must stand. And here we have our standoff.

The people made history in 2010, almost single-mindedly on the health care law itself. They intended to stop it’s progression. Now we are here in the middle of it’s implementation, and according to a CNN/Gallup poll, it is less popular today than it was when it was passed.

It is true that the GOP only has a majority in one branch of government, but to say they are holding an economy hostage is a lie. The economy is fine, and in fact perhaps better with less government intrusion.

But the President has decided to play politics, not principle. Ordering states to close STATE parks, ordering twitter accounts shut down (despite them being FREE), and turning off voice mail is meant merely to scare the American public.

With all the talk of mandates, I would purport that on either side of the aisle, mandates mean little in the short term. Government is meant to ebb and flow and have it’s checks in place. And the most current and relevant voice of the people (the House) has put a check on the President and Senate.

Clearly, American voters have indirectly asked for a compromise, and the House has given one: delay the individual mandate and repeal penalizing taxes in the law against medical device companies.

Yet, the President and Senate will not flinch. They are united in implementing this law, and ridiculing the very body they themselves claimed was a mandated check on Bush in 2006.

The Democrats are petty, pathetic, childish and flaming hypocrites of the highest order. The American people have placed more Republicans in every office on the state and federal levels. Far more. And yet, the Senate and the President are seeing the writing on the wall and holding their ground.

No one here has a mandate, and I certainly believe in a democratic-republic where reason rules over emotionalism. But the current fight in Washington has been falsely sold to the American people on an assumption that “mandates” matter and that the “minority party” in the House must fall into line on this issue.

I say, let it play out. The drama is annoying to most of us, but it has always been this way (read some history of the Founders fighting it out…) and it always will be this way. It is necessary to the function of a democratic-republic as the winds and walls of government work against each other.

Hopefully, next November, the winds push the Senate back into Conservative hands and we can finally begin to repair the damage done by the last 2 year winds of change we suffered in 2008. It’s been a long road back, and America is strong.

Don’t fret and don’t get angry. Just talk, learn and do everything you can to achieve locally what we feel is impossible nationally.

That’s how they did it for 150 years. It’s time we learned a few tactics, and one of them is that you can change the world, with or WITHOUT a “mandate.”