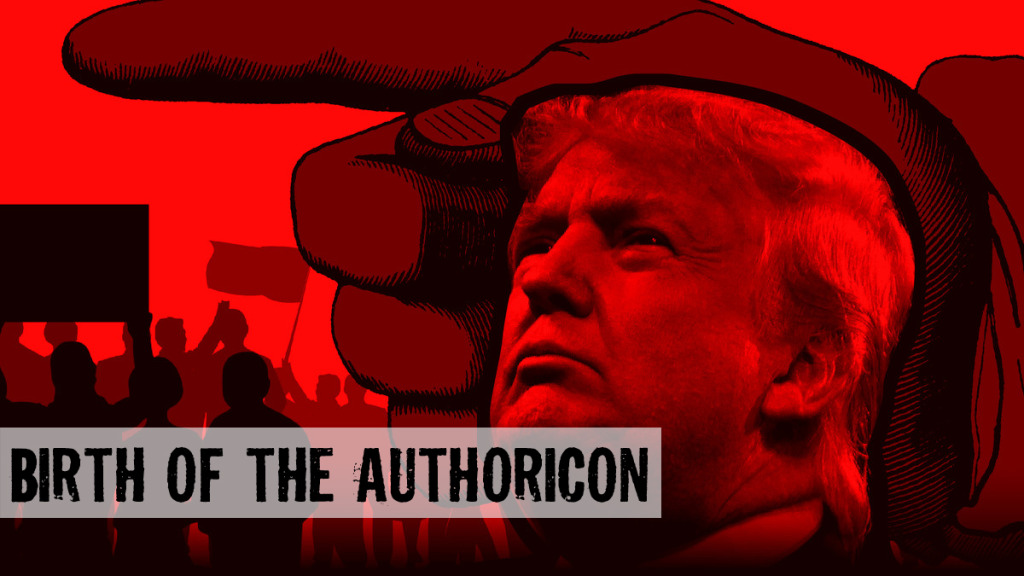 In the 1960’s, in an effort to expand the political base, Republicans began appealing to liberals that were hawkish like them on national defense, and felt strongly about opposing Soviet influence around the world. This relationship brought us quasi-“conservatives” that would become known as “neo-cons.” In hindsight, the same kind of political re-alignment has been occurring for years since Donald Trump became our candidate for President, and forced the conservative movement to bind together with an authoritarian, nationalistic fringe. A new coalition was born, and this brought us a new sort of political animal that bears some of the hallmarks of conservative thought but knows little about restraint or civility: it is the birth of the “Authoricon.”

In my journey as a political activist, writer, and politician, I’ve developed nuanced views of certain issues, but what conservatism meant was always fairly clear. I was raised in a Christian conservative household, homeschooled all 12 years of primary education, and even spent my college years as a conservative activist at a Christian college. Now I live in the suburbs, and even became a card-carrying, dues-paying Republican for a while. Tell me if I’m wrong, but to me conservatism has been about seeking less regulation, less taxation, less litigation, less manipulation of the social order, and less waste. It also emphasizes a right to life, liberty and property – the things necessary to pursuing happiness. Conservatism has always held a balanced view of government that it should only be large enough to keep my freedom from inhibiting someone else’s. Over the years, we’ve embraced the Cuban boatlifts, the WWII European diaspora, hundreds of thousands of Cambodian refugees, and supported the Taiwanese exiles. Our leaders were known for balanced budgets, giving 21 hour Senate speeches, and defending the free press from Obama’s abuse of them. Jay Sekulow, who has famously derided “fake news” for years on his radio show actually lamented President Obama’s attempt to “kill the free press” in 2014, in a FoxNews opinion no less. And although it might get you branded as “establishment,” or a “moderate,” adherence to the company line was never policed the way it is now. You simply aren’t allowed in most GOP circles if you aren’t “on the Trump train.”

We’ve always been the dreamers’ biggest cheerleaders. The Republican Party was itself founded in the wake of the Know-Nothing movement against Irish refugees, German “forty-eighters,” and the migration of southern blacks. The GOP pushed for the reconstruction amendments to ban slavery, and ushered in the Civil Rights Acts of 1957 (only 19 opposed), 1960 (15 opposed), 1964 (40 opposed), and the Voting Rights Act of 1965 (only 26 opposed). We believed in a strong republic, with personal liberties and balanced government.

But that is no longer what conservatism seems to mean to those around me.

We say we believe in less government, except for law enforcement.

We’re allegedly fiscal conservatives, unless it’s for the military.

The constitution is sacred, except when it gets in the way of a policy we think is more important.

Immigrants looking for a new life are a part of our fabric, but only if they come by sea, not by land.

We believe free markets are best, except when it’s with “unfair” Chinese and those pesky Canadians.

We believe in the separation of powers, except when the other party controls on of those branches.

We adhere to the power of protest, unless that protest is for something we don’t like.

The freedom of the press is sacrosanct, unless it doesn’t confirm our bias. It’s “fake news!”

Judicial activism is evil, unless it helps our cause.

Unions are a bad thing, unless they lean conservative and represent police forces.

The Tenth Amendment was the bees knees among conservatives, until Obama was gone.

Recess Appointments were unconstitutional, until they were needed.

Executive Orders are abuses of power, unless it’s to reverse the damage of the other side.

All of these reversals are difficult to fathom. They require an intellectual dishonesty I do not have. For the last three-plus years, conservatives like myself have been pointing to the authoritarian tendencies and actions of the Trump Administration as a problem. It’s anathema to our principles, both as a movement and a nation. But an alarming percentage of the movement openly embraced it. It was hard to identify in the beginning, but after three years it’s more clear. Ours has changed from a respectable ideology to a cultish manifesto of irrational and inconsistent beliefs.They needed a common bogeyman, and for eight years, they found one: President Obama. Those conflicting ideals were brought together by a common theme of authoritarianism, and driven by a nationalistic urge. After years of being groomed into an emotional, activist movement (think: tea party), the political Right seems to have been ready for a populist leader to unite them under the same political banner to take on the establishment, or what it now calls “the deep state.” And such rebellion requires force, brashness, rudeness.

I had a hard time watching Conservative leadership transform from a think tank to an asylum, let alone at such a pace, but I now realize it was long before in the making. Cable news often caters to confirmation bias (that is our own bias, seeking out confirmation), and social media legitimizes and empowers the voices of those who never had an audience to become “influencers” and “thinkers” for the masses. I quit FoxNews like a bad drug years before Trump came on the scene, but social media has transformed us into an immediate feedback loop.

I often wonder if the sustenance of the malcontented is cut off they’ll slither back into the cracks of society, but I do worry that even after Trump is gone it will linger and regenerate later on. Kurt Schlichter, the conservative Salem Radio personality, TownHall contributor, attorney and author, has written glowingly about Trump, but worried that “if the left gets rid of the Trump we have, normal people will turn to the Pinochet we need.” He’s referring of course to the infamous Chilean Dictator, Augusto Pinochet, the 17-year dictator who ruled with a libertarian philosophy, but with a lethal authoritarian fist. This is terrifying.

Arguably, a few cool heads are trying to manage this wheelbarrow of misfits, but if they don’t fall in line they’re also considered “deep state.”

There are many examples where this fetish with authoritarianism and power can be seen. Notice how the political Right cheered as Trump issued executive orders to change congressionally-appropriated funds, rewrite rules for immigration, halt travel to and from certain countries, alter how federal funds were granted to states, and further militarize our police forces. The President’s repeated threats to crack down on what he terms “enemies of the people,” “unfair people,” “evil democrats that don’t care about life,” and “thugs” bring ecstatic rounds of applause at his stadium rallies. His view of how much power he has is almost unrestrained.

“When somebody is the president of the United States, the authority is total. And that’s the way it’s got to be. It’s total.”
– President Trump, April 13, 2020

The reception on our side has ben the same when he says things like “I will be authorizing each individual governor, of each individual state, to implement a reopening…” Authorizing? Says who?

Or last week, when he tweeted at Seattle’s mayor, “take back your city NOW. If you don’t do it, I WILL!” Conservatives fist-pumped the air.

How about when he told police officers “please don’t be too nice” when handling apprehended suspects? Many of my friends laughed. I was shaken.

Remember when Trump threatened to adjourn Congress so he could make recess appointments? He doesn’t have the authority, but conservative media and talk radio ate it up, and the Heritage Foundation gave it legal cover.

Protesters of police brutality and systemic inequity were abused and tossed about, and many of us found it acceptable. Forget the irony of it all, the reaction to the images has drawn a brighter line between one group of people and the rest.

Authoritarianism is attractive to those who are impatient, and feel victimized by the “system.”

Fantasy With a Strongman

This isn’t just an American phenomonon. A far right Israeli author has attempted to rewrite the negative history of the strong Nationalism concept. Far right leaders nearly won the French government a couple years ago. Meanwhile conservative authors Patrick Deneen and Christopher Caldwell have praised Hungarian prime minister Viktor Orban as an example for American conservatism in the future. Deneen called him a “model” for American conservatism, and Caldwell referred to him as “blessed with almost every political gift — brave, shrewd with his enemies and trustworthy with his friends, detail-oriented, hilarious.” The deputy White House liaison of the U.S. Agency on International Development is a nationalist named Merritt Corrigan, who apparently adores Hungary’s Orban as a “shining example of Western civilization.” What their glowing reviews fail to mention is that Orban has used his newfound power to crack down on civil liberties, cut off immigration, and attack the press. Sound familiar? Even worse, he has executed a new law that bans “spreading a falsehood,” which led to the arrest of its author, a 64 yr old named András for calling Orban a “dictator.” How ironic. András was eventually released from police custody, but the cops told him that “a malicious or ill-considered share on the internet could constitute a crime.” How far off this thinking is Trump’s recent executive order on social media, making them liable for the content users publish? It’s meant to silence detractors through fear of litigation. Recently, the legislature passed legislation that says he can create law “by decree” during emergencies, such as the recent Covid crisis. His authority became “total” for 84 days.

This is NOT a model for American conservatism. Impatient authoritarianism is never a virtue, even after eight years of a liberal presidency. The end does not justify the means, and the method does matter when governing the public. Also, words, and truth matter.

Attacks on the free press, the free market, free trade, and even unreasonable degradation of political opponents do not belong in our Party. Neither does bullying, strongman tactics or authoritarian behavior. Some have acted like they don’t agree with it. So often, the rationalization you hear is, “they did it to us. We finally have someone on our side.” Or perhaps, “whatever it takes to put things back the way it should be.” A common one is “I don’t agree with everything he does, but… SOCIALISM!”

We are being led into a new dogmatic creed that contrasts with the one above.

Distrust all information that contradicts our own bias.

Hate all things (and persons) liberal – a.k.a. “socialist” and “communist.”

Be arrogant and beligerant toward foreign allies. They owe us for their existence.

Disdain the efforts of poorer immigrants, and realize they’re “leeches.”

Learn to appreciate high school taunts and uncivil behavior as being “tough.”

Forget ISIS infiltrating MS-13, that was so 2016. Be fearful of an unorganized fringe group of anarchists called “antifa.”

Everything, literally every single thing has a political relevance, and if you don’t agree with it, you’re a commie.

Never, ever, ever criticize the leader of the Republican Party. They are your commander-in-chief, and we are his soliders.

There is some snark in this list, but how far off is it, really? Populism inspires the masses by making them fearful of others, and ignorant of objectivity. Populism always comes with authoritarian leadership, and all authoritarians are populists, salesmen, and flatterers.

Welcome to the age of the “Authoricon,” and R.I.P. to the real conservative movement. Most simply transferred with the changing of the guard, while the rest of us were left behind. May the spirits of Buckley, Freidman, and Reagan return to the pages and words of future thinkers, writers and politicians as they rebuild the future conservative movement for people like me. Because right now, we’re in exile.