These two images blew my mind this week, as news of another senseless black death rattled America (here’s 26 stories of ones we’ve forgotten or never heard of), weeks after we heard another man was gunned down in GA by a citizen. I find them stunning, even if you don’t like them. 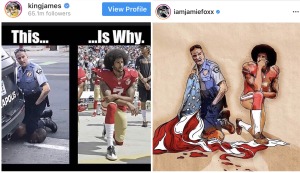 I don’t agree with kneeling during the anthem. But I understand it. Gimme a minute…

In the illustration posted by Jamie Foxx, the artist shows the officer using the flag to obscure his fatal behavior of kneeling on the neck of a black man for nine minutes, as the red stripes of freedom bleed on the ground. Meanwhile, Kappernick is shown also kneeling, but one foot is on the corner of the same flag, indicating he’s not letting it blow away from him either.

I refuse to be pulled into one corner or another with any issue, let alone this one. Truth is usually nuanced, so I try to see both sides. I’m not trying to be argumentative in a negative sense, but I like to hammer out details of everything to see where everyone comes from, and where the truth lies. (Pun intended)

But it’s getting harder and harder as a conservative white man to defend a system that is overwhelmingly filled with a bad culture. That culture too often reduces an otherwise noble profession into a fraternity that will back their fellow badges, no matter what, sometimes over the ideals those badges were founded to protect. The vast majority of cops do NOT fall into the category of abusing those ideals, but I feel that *most* have unwittingly contributed to this culture through silence or passivity, and *many* are quietly aware of this problem: those who do violate our expectations or civil liberties too often get away with it. It doesn’t help when our president jokes about casual police brutality, and the rest of us watch TV shows that glorify it. I’m as guilty as anyone. And as with any system, when there’s a lack of outward accountability from people like us, there’s a lack of inner responsibility.

As a country, we reduced “black lives matter” into a political pejorative years ago, and since then GOP offices have been filled with thousands of “BACK THE BADGE” yard signs, as though the blue line is a political measuring stick. This has always bothered me a bit, but now it sickens me.

I’m tired of being expected to fall into place when it comes to important issues that political strategists value. I appreciate the police force, and the incredibly dangerous job they have to diminish crime and keep the peace. Few of us have the guts to walk up to darkened cars at night on a busy highway, or enter run down homes because a man is beating his wife. But their jobs become a lot harder when people lose trust and respect. Likewise, people lose that trust and respect when those same officers behave in ways that range from unbecoming to outright criminal. Juries have stood by officers when they shouldn’t have, and higher court judges have too often done the same. I know the job of an officer is hard. It should be. But they’re not victims here.

Is this about racism? Sometimes, yes. But more often, I think it’s about power. How many white men and women have been gassed, thrown to the ground, trampled or fired at by cops standing with black brothers and sisters this week? Or how many remember that scene in the John Singleton movie, “Boyz n the Hood” where officer Coffey, a black cop, was more hostile and abusive than his white partner? Power corrupts. Unaccountable power kills. And when poverty has dragged the majority of a particular race down the ladder, that power gap is often seen as a racial one. It doesn’t matter if you don’t like it or agree with it, it’s a reality for tens of millions of people we share a country with. And with several centuries of slavery behind us, it’s not a leap to connect the two. We should seek peace and understanding in more ways than just moving further away from the problems.

I think our system needs to focus more on the root of the problems, rather than the results of it, especially when it comes to police forces and the criminal justice system. I support the 8CantWait proposals, among others, to reform our law enforcement systems. Good cops can’t make up for a failed structure.

Black lives do matter. (This is the first time I’ve ever said those words like that.) I’m not worried about white lives. We’ll be ok for now. Look at the shutdown protests filled with gun-toting activists from the suburbs if you don’t believe me. I’m still a rock-ribbed conservative, but I have higher standards for my government leaders and neighbors than I did before. I hope you do too. If not, stare at these a little longer. 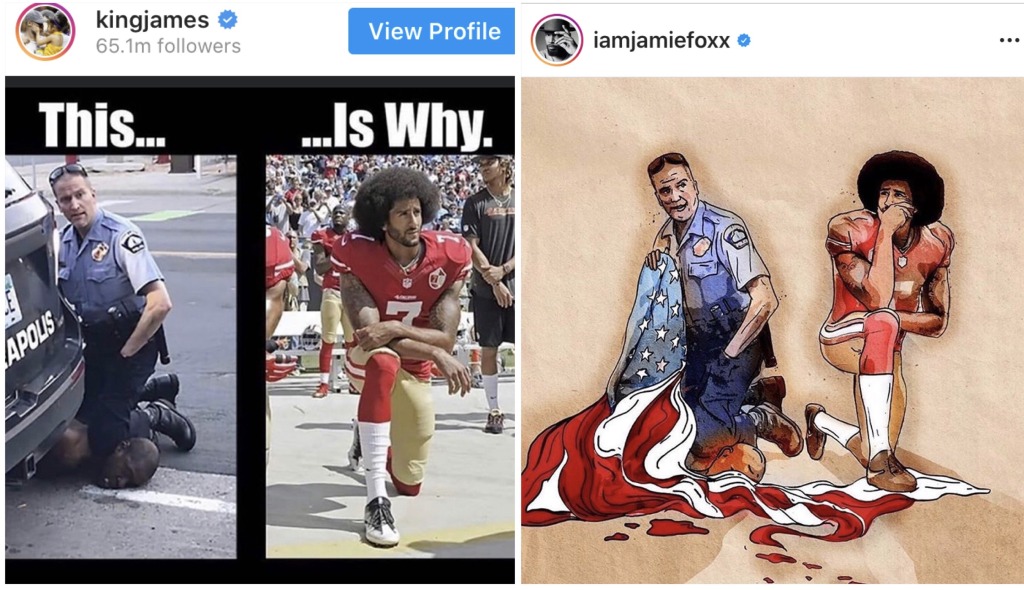