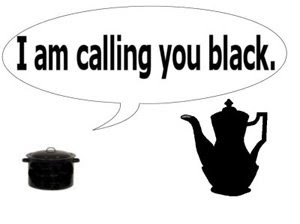 The official response from the Barack Obama campaign today came through his minion, Bill Burton who said:
“Today, John McCain put the former mayor of a town of 9,000 with zero foreign policy experience a heartbeat away from the presidency.”
Are you kidding me?!
First of all, while I appreciate the implication in this statement that John McCain is in fact the next presumed President of the United States, I would like to point out my own observation of monumental hypocrisy:
“This week, the Democrat Party put the former ‘present, but no vote’ legislator of the State of Illionois with zero foreign policy experience a heartbeat away from the presidency… if America is stupid enough to elect him.”
That’s all… I just wanted to point out the pot calling the kettle bla…. oh shoot, I can’t say this can I? Ummm….. You know what I mean.