Article II, Section I, Clause II, of the Constitution:

“Each State shall appoint, in such Manner as the Legislature thereof may direct, a Number of Electors, equal to the whole Number of Senators and Representatives to which the State may be entitled in the Congress: but no Senator or Representative, or Person holding an Office of Trust or Profit under the United States, shall be appointed an Elector.”

The Congress may determine the Time of chusing [sic] the Electors, and the Day on which they shall give their Votes; which Day shall be the same throughout the United States.

Amendment XII of the Constitution:

The Electoral College is an institution that elects the President and Vice President of the United States every four years.

This is not a flaw in the Constitution, but a feature. Something the framers of the document insisted upon to avoid the likely tragedy of a raving populist using charm and emotion to whip the masses in their favor. It was a protection of democracy, but also from it. A balance, and device by which the will of the people could be represented in every case, but ultimately, wise and educated people were charged with carrying out the act of governing.

A MAJORITY OF ELECTORS ARE UNBOUND

Currently, only 30 states currently bind their electors to the popular vote, two of them (Nebraska & Maine) by congressional district. 24 of them actually punish faithless electors, usually a $1,000 fine, or something similar. One state, Michigan actually invalidates the action of a faithless elector. 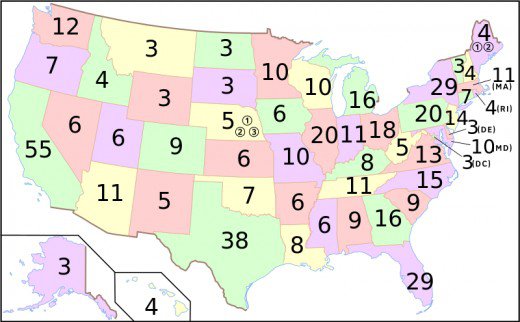 States with restrictions or penalties of varying degrees:

However… this means that 21 states’ electors are ENTIRELY FREE to vote as they wish, if led to do so. This represents 334 of the majority of the total 538 electors. A significant majority. Those states include:
Arizona
Texas
South Dakota
North Dakota
Idaho
Minnesota
Iowa
Illinois
Arkansas
Louisiana
Kentucky
West Virginia
Indiana
Georgia
New Jersey
New York
New Hampshire
Rhode Island
Kansas
Pennsylvania

The assumption, when electors are selected is that they’ll vote as their state votes. But not always. Most recently, a DC elector refused to vote for Al Gore, in protest of DC not having an elected Congressional representative. This weekend, after more appalling evidence of Donald trump’s depravity, a Virginia elector vocally admitted he may not vote as instructed by state law.

“I now pray for the good of the country that either Trump steps down as the GOP nominee or that the Republican Party finds a way to utilize the Electors who will be given the opportunity to vote in the Electoral College to still elect a Republican and conservative administration.”

This election year, this could be the last firewall against the worst presidential candidate in history, if all other efforts fail.

My chosen candidate in this general election race is Evan McMullin. His strategy is to win enough electoral votes this election to keep both major candidates from reaching 270, a majority of the 538. In this case, Amendment XII of the Constitution later states that the newly-seated House of Representatives shall take the top three electoral vote-getters when it first convenes in January. Each state delegation gets 1 vote. Currently, 33 state delegations are controlled by the GOP, while three are shared 50/50. Democrats control 14.

As a former director of policy for the House Republican Caucus, and a long time CIA operative serving overseas in the war on terror, McMullin holds a strong chance to sway both Democratic and Republican representatives as a consensus candidate. But, this strategy only works if the race is close.

The real light bulb moment here is that the next president is in the hands of 538 individuals like you and I, who have been given the task of making an informed, wise decision about which candidate should be the next president of the United States.

In either scenario, I believe that Evan McMullin stands the best chance of bringing more Americans together than any other candidate. While a principled conservative, he’s not an ideologue. While a strict constitutionalist, he’s both persuasive with his belief, and diplomatic with his tone. Above all, he’s honorable, steady and intuitive. America needs a leader that doesn’t divide, label, mislead or hide who and what they are.  He’s not power-hungry, nor is he corrupted by the system we love to hate.

Evan McMullin is the best choice we have to stop both Clinton and trump on Nov. 8. And fortunately, our Founders made sure the masses are not the only ones deciding this.

For what it’s worth, if no president is selected under either scenario by inauguration day, Clause III of Amendment XX states that the House shall choose a temporary president to fill the role. This would be most unlikely to occur.