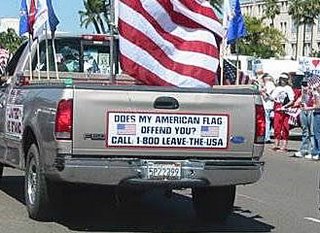 Apparently patriotic displays of the American flag have increased tension in a local Oceanside High School, so the entire Oceanside Unified School District has banned all flags and patriotic clothing.

Superintendent Ken Noonan made a decision last week asking students to leave flags at home. He also prohibited placards, face paint and signs related to last week’s protests, because all of these items were contributing factors to the violent acts on campus surrounding immigration demonstrations. This temporary limitation is allowable under California Education Code.

Oceanside schools Superintendent Ken Noonan hopes this deals with threatening violence on their campuses. He said “I have a concern when flags are used as a means of emotionally attacking somebody. The flag is not a weapon.” At one Colorado High School, High School Principal Tom Stumpf says some American flags “were used in a ‘vilifying fashion’ by being waved in the faces of Hispanic students.”

Talk show host Rick Roberts on KFMB San Diego had this to say: “American students are being punished for the idiocy of those breaking all the rules and expecting us to respect their opinion.”

People come to this country because they want to be Americans. This flag problem is not what the angst is about. I understand enforcing civility, but draw the line at cracking down on displays of patriotism and the heritage of this nation. The American flag is not the problem. For crying out loud, even the Mexican flag is not the problem. Our schools are now being run by adolescent dictates of whom 25% will never even graduate. The public schools have lost control of their own classrooms. THAT is the biggest concern in our public schools. Yet legal, law-abiding, homeland-loving Americans are suffering the consequences. Frankly, if someone is offended by my American flag, they can leave. A little blunt? I don’t care. We all retain part of our culture, but we’re all Americans. Don’t rob any of us of our enjoyment of it. Clearly everyone else protesting is enjoying it right along with the rest. We are people of many creeds, colors, faiths and origins. It is a beautiful patchwork of God’s creativity. But to wrest the concept of American freedom, security and the protection of our sacred homeland from the hands and mouths of those who love it is scandalous.

Why don’t they support the law that frees them?

Miseducation, that’s why. Hundreds of thousands of protesters are protesting a bill that would merely place every illegal immigrant into a pipeline toward legality while putting backbone into laws that already exist. Some of the protesters are even going so far as to use the right of free speech this “terrible, hateful nation” affords them to criticize and demean the very honor of it.

I ask them this question… How can you blast the United States and claim the U.S. stole land from Mexico, yet you choose not to live there? Apparently, they are convinced that because their grandparents and uncles and aunts and friends are decent, good, hard-working individuals that it overrides the fact that a fairly large portion of illegal immigration is harmful to this nation. The harmful consequences effect not only naturalized native-born Americans, but legal, law-abiding immigrants from around the world as well. We’re all in this together!

So…do those folks also deserve amnesty with all of the others?

The answers are not easy, the questions are difficult; the circumstances ought to be highly motivating, because the outcome is going to be fundamental to the future, either way it goes.