Politics is the art of compromise. Purists often reject this notion, claiming they’ve done so for too long. They’ve had enough! NO MORE!

Well, good luck changing the political system for the first time in known human history. Government will always be a battle between multiple forces, good and evil, with better, best and a prayer in between. The system we have was designed for the very benefit of the people some claim it thwarts, knowing our faults and our virtues. Republican government and a representative democracy were fused together to harness the best of human nature while corralling the worst of our inhibitions. While it’s not a perfect system, it’s the best mankind has yet to implement.

Every election is one of choosing the “lessor of two (supposed) evils” because it is impossible for everyone to agree on everything in a single candidate. Even on a municipal level, the smallest of issues can divide neighbors and family members. Taxes, construction… Recycling. The compounded effect in a congressional district of 700,000+ makes it even more conflicted. The post-17th Amendment Senate is hell for consensus. Yes, the further from the people government is based, the less able it is to truly represent the people and more prone it is to corruption. But removed it must be, for representation, because direct democracy is also prone to direct corruption. The happy medium is to delegate various purposes of government among the appropriate entities like municipal, county/state and federal. Our problems are not solved, but exacerbated when we centralize decisions that are best left as local as possible – take education as an example.

Cities will always pick up trash, plow the streets and set property tax rates. States should run everything else cities cannot, that it is best at – river ways, highways, judicial and legal standards, voting laws. The federal government was purposed to run everything states could not, and this relatively short list is found in Article One, Section Eight of the Constitution. This is what makes us conservatives – Just enough government, where it’s needed to assure the most freedom. But we are not alone at the ballot box. When conservatives get angry about the size of government, it’s a noble fight, but in the end we are only part of society. We cannot change the world simply by winning elections, but by persuading those around us and taking small, progressive steps to our goals. Is this what the barn burners want to accomplish?

It worked for the statist movement for 150 years. They knew the best way to change government was to start small, be patient and accept small wins. Why can’t we learn from them?

THE ELECTION THAT NEVER WAS

When this election season began virtually no one took Donald trump seriously (I refuse to capitalize his name, a “brand” of which he’s disproportionately proud). Almost to a voter we expected him to fade. But he found the balance between the George Wallace and Pat Buchanans of the world and flew the populist banner to new heights they could not achieve. Perhaps it was the advent of social media, or the grip of reality TV that made this campaign possible. But for the first time in over 100 years populism gripped a third of the voting population and created a dynamic few knew how to handle.

My preferred candidate was Rick Perry. I unashamedly supported him for his character, his experience, his proven record and his ability to connect with people, persuade others to the conservative cause and make the right decisions. He was the rare leader that when he made a mistake, he would correct it and even work to reverse the consequences of that wrong decision. But this race would not give grace to honor, respect and character. It wanted anger, emotion and drama. So I was forced to let it go.

As the campaign season lumbered on I watched as fellow conservatives (and a few thousand disaffected, angry Democrats) began to find a home with the trump campaign. Some conservatives and liberals alike no longer cared for ideological purity, only destruction. The angrier and more irrational he got, the more they applauded him. I believe much of his support is among the less informed, even apolitical of us. They are seduced by authoritarian tones and emotional expression. They cannot be won over, reasoned with or, sadly, avoided. They vote. Fortunately, they are also a small minority of the voting population.

The system of political primaries is complicated and it changes every year. Two major state parties, multiplied by 50 states, layered with legislatures and two national party conventions make for a complicated weave of rules. Originally, parties made their selections entirely on the discretion of delegates chosen at the local level. There were no public, primary elections. Progressives in the late 1800’s worked to change this system, with a populist message of “democracy,” and by the early 20th century most states had some form of public election for party primaries. Did it solve their concerns of corruption? Like our form of representative government, parties are made mostly of delegates that are voted upon by party members. Many states bind those delegates to the “polls” cast on primary election days, some don’t. What populists still cannot handle is that in the end, these delegates hold the power over nominations – this has not changed. Our party apparatus are modeled after our original government structures. And there’s a reason our Founders valued representative government over direct democracy: populists throughout history have manipulated and damaged social order by fanning the flames of the vulnerable. Our primary system, like our state and federal governments, is designed to avoid that. A representative, federalist republic both protects the minority, and empowers the majority to govern themselves and provide consent to the governing. It’s a brilliant system that has given us hope that this trump train of destruction is nothing more than a generational temper tantrum that will pass.

As a result, trump supporters, knowing they’re no more than a sizable minority have both rejected the power of the delegate-run party structure, yet gloated over the fact that a candidate with 37% of the popular vote could command 46% of the assigned delegates. They believe they’re entitled to victory.

Regardless, it appears that the 65-70% of Republican primary voters know better. They’re collectively choosing someone other than Donald trump, and are now coalescing to stop the movement. The Waterloo of the trump campaign has arrived, and for the first time in my life, my home state of Wisconsin is where the focus is at.

THE ART OF COMPROMISE

I do not hide the fact that I became disillusioned when my governor, Scott Walker changed and became dishonest in his own pursuit of the nomination last summer. I will not deny that while I started out respecting Ted Cruz, I discovered how manipulative and dishonest he was willing to become to win voters and elections. By December, I had lost hope as he looked at the camera and told us the opposite of what I observed years ago. He had lied to us, accused everyone opposed to him of lying, and I entirely lost respect for him. But as fate would have it, the populist/authoritarian campaigns of both trump and Cruz shoved out all respectable options and left us with the worst of the best. So now what?

Tomorrow, my state votes in the Republican primary. My greatest fear is a president for whom I have to apologize to my son. I am terrified of losing ground that for 10-12 years, me and hundreds of thousands of other conservatives have worked so hard to achieve in changing this Grand Ole Party. I could never rest if I supported a man who is a contradiction of traits that could destroy our social order and embarrass parents everywhere. While he is savvy, he’s also unstable; timely but unrestrained; dictatorial but weak. We teach our children to behave differently, so how can we support these promitive traits in our leaders? If I support trump indirectly or directly, I will bear the scar of the Wallace and McCarthyites that wore the same for decades after their brawls. While I want positive change as much as anyone I’m also dedicated to engaging the system that exists and accepting small victories. A trump candidacy would burn down the storehouses, destroy the bridges and cheer the bonfire of everything our Founders put in place to keep us free, but orderly,

While politics is about compromising, it is also about hard choices, and this will be the hardest one I’ve had to make since I became a voter. While voting for Romney in 2012 and McCain in 2008 was difficult to accept, I was not afraid of what my son would think of me when he got older.

As much salt as it takes to avoid a stomach ache in the morning, I will vote for Ted Cruz on Tuesday, April 5th, to stop the Unstable Minority from terrorizing the Rational Majority. While Ted Cruz was nearly last on my list of the obnoxious 17 we had to choose from, he is the best remaining chance we have of purging our representative system of this mob mentality that threatens our Party and 60 years of the Conservative movement.

Please join me in #Nevertrump, and vote for the candidate best positioned to keep trump from 1237 delegates, and instead focus on putting the best people in place for the national convention July 18th. I don’t want Cruz as our nominee, but I cannot tolerate the destruction of the vehicle I have to make my son’s life better than my own. The GOP is worth fighting for until it is dead, and there is still plenty of fight left. It will be a moment for history and we get to be a part of it. But don’t take your foot off the pedal after your primary vote and go into cruise control. We have the ability to make a difference. Lets start tomorrow by voting #Nevertrump. 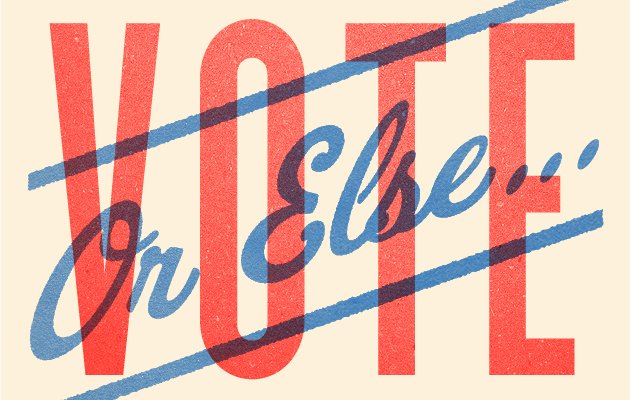