Many people, including respected pundits keep saying almost every primary is now “winner take all.”

That is simply untrue.

A simple look at the calendar reveals a lot about each state. It can be confusing because few have actually done the homework (I still have not done all of it), and when one person says something, another repeats it, because they assume the other did theirs. How many times have you heard radio, online and TV personalities and analysts talk about how after the Super Tuesday (SEC) primary, “most states become winner-take-all” elections? At the very least, they imply that the “winner-take-all” concept will shape the outcome.

Below are the states that are NOT simply Winner-Take-All (WTA). In fact, only 11 states are truly WTA. Seven more are a hybrid requiring thresholds or by districts. That means some delegates may be awarded a pot of, say 30 delegates based on winning the overall state, but if another candidate wins three or four other congressional districts they could walk away with nearly as many, depending on the state.  Wholly 1,000 or more delegates remaining are in strictly proportional states, meaning that this race will be almost impossible for one candidate to garner a majority as long as they remain between 20-30%.

So please, Cruz/Rubio supporters, do NOT believe what you hear.

At this point, my guy is out of the race. But I will never vote for trump (I refuse to capitalize his name – he’s overly proud of his “brand” and I won’t give him that respect), meaning I want whatever is the most likely and efficient way of stopping him. I believe that at this point it would be easier to keep him from getting the 1,237 delegates needed for the nomination than it is to help someone get to 1,237. Then, at a brokered convention the delegates – who are much less likely to support trump – would start being released after the first vote, and unbound according to the rules of their respective states. This means the GOP will most probably be spared an embarrassing split that would surely occur with his nomination. 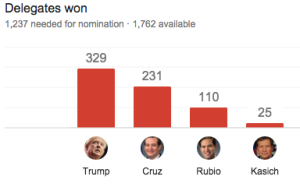 The calendar reveals a brokered convention is now probable.

NOTE: Delegate counts may be slightly off.

May 3:
Indiana (57) – Winner take all state wide and by congressional district (similar to WI) (30 statewide, 27 district) 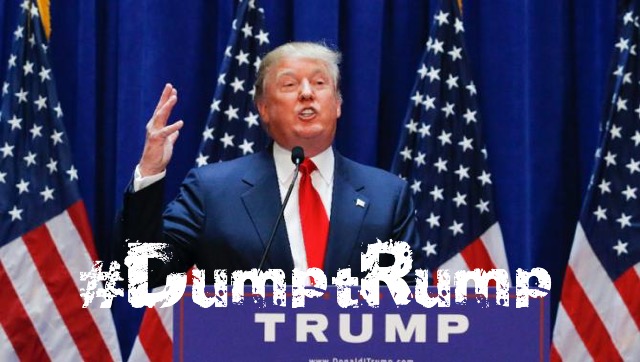