“For the life of me, I don’t know why we have stigmatized vocational education. Welders make more than philosophers. We need more welders, less philosophers.”

Marco Rubio delivered his most memorable line of the night in breezy Milwaukee, Wisconsin during the fourth GOP Presidential debate Tuesday night, October 11th. While the audience erupted in applause, knee-jerk liberals and the self-appointed conversation editors in the media were already in a tizzy, taking him literally.

They couldn’t help it. Marco insulted philosophers across America! Where would we be without them?

See, liberals are always ready to pounce on anything – like a cat chasing a string – but they failed to see the point of Rubio’s comment. He was speaking about vocational training, supply/demand and what skills our nation needs. He was discussing the glut of empty welding jobs available across the country, with the lack of trained, able workers to fill them. As a one-time philosophy student himself, who went onto studying law, Rubio understood how many people make a college degree out of what is better as a class topic, and end up never working in that field. “We need more welders, less philosophers.” If only those predisposed to dislike Rubio had allowed that line to shape the context of the entire statement…

Apparently, the world just doesn’t have much love for philosophy. Not that they aren’t needed. But they aren’t needed as much as welders, or marketing directors, or business managers, or even design majors. And, as a result, only 2,000 students a year graduate with a postsecondary degree in Philosophy or Religion studies. Even fewer enter the workplace in that field.

Then do actual, sure-as-heck philosophers make more than the average welder? Sure they do. But welderS make more than philospherS, because we need far more of them. Approximately 3,600% more.

So, Rubio was right, and liberals look stupid. And apparently unable to understand a metonymy. (Philosophy majors should definitely get that)

Sorry, liberals, but welders make more than philosophy majors because, frankly, the world needs more of them.

The next time a conservative makes a pitch for how people of any upbringing can get a good job and change their station in life, we should stop to think (for those with philosophy degrees it should be possible) that perhaps a greater point is being made.

The state of American culture is such that we shoo young dreamers away from vocational training and often send them off to college to “explore” themselves and what they want to do. Social work, psychology, design, humanities, art studies, journalism… philosophy. Unless you’re planning to secure a job in that field of study, you’re likely wasting your life and your parent’s benevolence. A common joke in coffee houses is that frequently the barista making your drink has a higher degree than you do, but they’re merely between jobs. Did you hear that Starbucks is now offering a new perk to it’s Baristas to help with employee retention? Free Philosophy degrees. Yep, true story. /sarc

There is nothing wrong with pursuing your interest and making a life of it. We even need philosophers, art majors and music therapists. The world is richer because of these schools of thought and practice. But the sheer amount of young Americans listing in the wind of a free market overflowing with jobs is staggering, and when the most common refrain is “we need trained workers,” why aren’t we training workers for those jobs?

If we want to become a nation of creators, builders and a middle class unmatched anywhere, we need to follow the advice of conservatives who understand that with skills comes value, and with value comes productivity. There will always be a need for philosophers, teachers, and yes, even lawyers. Doctors, nurses, pilots, engineers, programmers and theorists will always be an important element in the growth of human knowledge and skilled practice. But without welders, builders, carpenters, electricians or concrete layers those minds would never have hands to put their brilliance to work. How can we make America great again? By caring about what our children do with their lives and teaching them the richness that comes with being doers and not merely thinkers.

Thankfully, we’re having the discussion now.

But I have a feeling the result in most people’s minds is not going to be favorable to the academic elite and liberal media bourgeoisie. 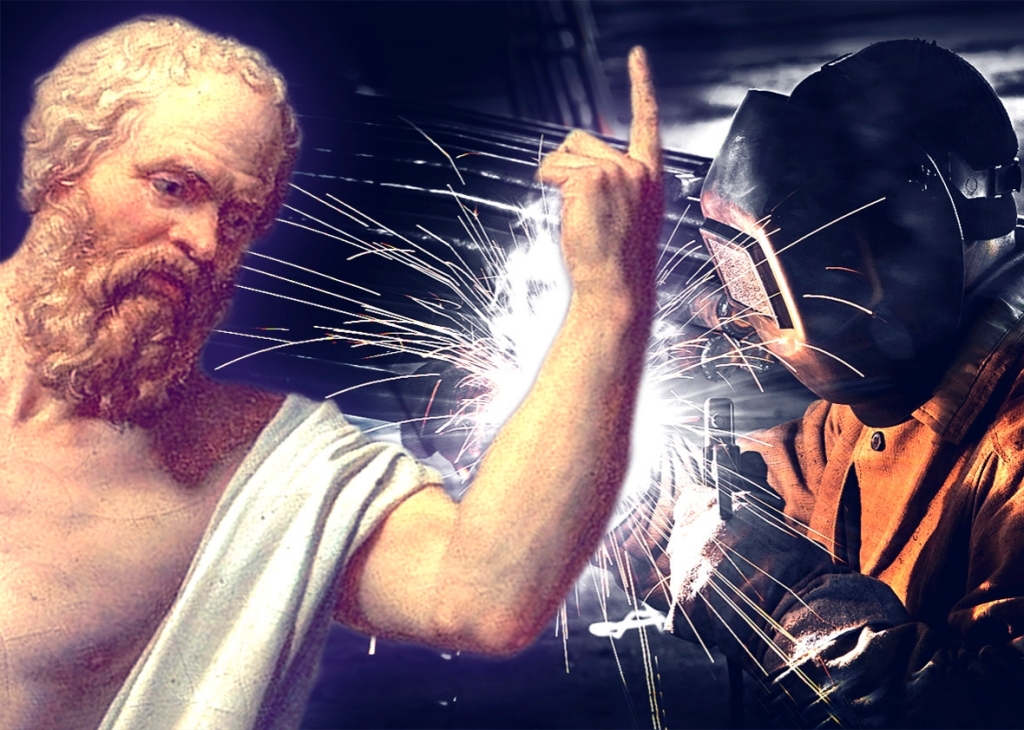