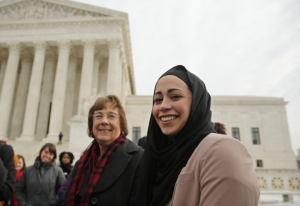 Actually, that didn’t happen. Yet.

At least, not that we know of.

But it could. Muslim women are forbidden from marrying outside their faith. It’s specifically banned by the Koran.

It presents a quandary for Muslims in positions of government.

Rowan County, KY clerk Kim Davis has become a bit of an overnight talking point for both sides of the gay marriage debate, and I wonder where some Christians would stand in the situation I described.

When I ponder, I try to settle on a position only after applying a bit of objectivity and irony. If my position, preferred or not cannot stand up to that irony or be consistent with my other beliefs, I relent. I am a Christian who believes that homosexual behavior is a sin. I disagree with the concept of gay marriage. I believe the 6-3 SCOTUS decision was wrong this summer, making it legal. I also believe it’s not the government’s job to regulate marriage, but also that government officials have obligations beyond that of normal citizens.

In this case, I cannot intellectually stand for her initial actions, nor can I stand for the civil rebellion of Kim Davis now.

The picture above is actually of Samantha Elauf, an Oklahoma woman who was denied a job at Abercrombie & Fitch because she required the wearing of her head scarf. A&F refused to hire her for this reason, and she sued. The Supreme Court supported her case 8-1 in June of this year. According to the SCOTUS, someone’s religious observance cannot be a factor in denial of access to something that doesn’t actually harm the liberty of others.

And as Christians, we should be grateful.

But these cases, and my hypothetical one present a confluence of contentious issues for us to think about. As a “Western” society, we’ve agreed to an impartial government. It is guided by universal ethics, which mirror much of what Christians like myself have embraced for millennia.

The Founders of this American experiment believed in the power of Natural Law, a philosophy materialized during the Enlightenment period that emphasized man’s right to liberty in life, production, and use of that production – the only limitations should be the exercise of that liberty in that it inhibits someone else’s. To Christians, Natural Law is based on the simple laws of nature’s God, while atheists or agnostic folks can simply acknowledge the morality of the system as natural. Everyone agrees.

On this foundation, most libertarian thought resides. And it’s hard to argue with Natural Law, until we introduce faith into the equation.

As a government official, the starting point changes, as your exercise of faith could impede public access or services. By nature, that infringes on their own liberty.

FAITH IS SUPREME, BUT NOT UNIVERSAL

Kim Davis has a God-given right to protest what she feels is an immoral law (or interpretation of one). She has a God-given right to observing her religious beliefs. But she does not have a right, either God- or man-made to impose her exercise of faith upon others. And accepting a job requiring the exercise of man-made laws was perhaps an unwise move.

Never mind the fact that no such biblical “law” exists that forbids the issuance of marriage licenses to same sex couples. Scripture only condemns the act itself. Furthermore, we don’t live subjected to a specific “law” of God, per se. But a guide. However, Mrs. Davis would disagree, likely because she is of the Apostolic faith, a denomination that holds some passages of the New Testament in as high regard as Old Testament law. For instance, women cannot preach, wear makeup, jewelry or have short hair.

While I respect their belief (and I know MANY good, honorable people of the Apostolic faith) I do not hold these beliefs, and their interpretation of “God’s law.”

Where do we draw the line?

Perhaps we need to discuss the legitimacy of officials who refuse to issue marriage licenses to interracial couples. Extreme, you may say? Rare perhaps? Maybe as rare as Kim Davis?

Regardless, a few decades ago, it was not rare. In fact, as recently as a few years ago, it was still occurring.

Would Mrs. Davis deny a business permit to a hair salon that cut women’s hair? Or a jewelry store? Perhaps giving approval to the application of a women’s fashion store selling pants would be offensive to her. These are fervent religious beliefs among millions of people around the world, so they count, right?

In the end, Kim Davis ran out of options in the quest to protect her religious liberties vs. civil liberties. The Supreme Court refused to hear her case, and a local judge found her in contempt of federal court for refusing to obey previous orders to perform her job without discrimination. Despite the pleas of lawyers representing the gay couples to merely fine her, the judge decided to jail her until she relents.

My position is nuanced.

Kim Davis is a public official, beholden to the constitution, not just local laws, and not even (just) God’s laws. The Constitution requires her to follow the ruling of the SCOTUS. The June ruling was ridiculous, IMO, but nonetheless, Article III, the Supremacy Clause and 14th amendment obligate her to comply.

Not as a person, but as an official.

She sees them as one and the same, but as a society, we have chosen a system that does not.

Nonetheless, she SHOULD NOT be jailed. The judge doesn’t need to make an example out of her. Leaders in office or on the bench have an inherent obligation to bring people together in cases of law and legislative debate. They should seek to heal and bring mutual understanding, so we may live in peace, not conformity.

This is not the way to bring healing and understanding. This will ruin her life, and it shouldn’t. She should quit her job, or let her deputies issue licenses, but to damage her entire future over this is just as wrong as her initial contempt.

Unfortunately, this issue will become a gotcha question for presidential candidates and fodder for future debates. I wish it were merely a footnote.

It should be noted that if government remained out of the marriage business, as it had for thousands of years, we would not be at this crossroads. Contention like this is simply the aftermath of one group thinking they can regulate the behavior or results of other groups.