COMPETITION IS GOOD – POPULISM IS NOT

It’s great to have competition. Conservatives believe in the power of fair competition to improve, streamline and ultimately expand things – especially in politics, where multiple challengers can cause others to be better candidates. But today, the GOP primary race looks more like a 16-ring circus than a job application line. And while there are some great candidates lining up for the chance to earn your vote, some have no intention of really winning. It seems they’re running for the post-office life, the next book deal, or a lifetime of doubled speaking fees. While politics takes a strong ego and self-confidence, it is also defined by a certain maturity that is revealed by caution, tact and intelligent action.

So why, then is Donald Trump getting this much attention? Every political figure makes mistakes. Typically, leaders are known to give us a faux pas – the public usually enjoys it for a few days, then shrugs it off. But Trump is no typical candidate. They have a man who thrives, even expands his brand by virtue of people talking about him.

Well, at least he recognized that SOME were good people. We wouldn’t want to paint with a broad brush… Two weeks (yes, TWO WEEKS) later, he issued a clarification, but rather than apologize for the way his words came across, he doubled down. Why? Because that’s how the risk takers do it! By doubling down, the media got what it wanted: a celebrity figure utilizing what brought him that celebrity, and running insincerely for the most sincere job in the world. And that celebrity is bringing an inherent earthquake in the GOP unlike anything I’ve seen.

Then, at the Family Leadership Summit in Ames, Iowa just last week, Trump delivered a well-timed moment of drama to make sure he stayed in the news. In a room full of the conservative Christian faithful, and mere moments after a powerful ode of spiritual renewal from Foster Friess, The Donald delivered a dose of Manhattan pie: he said he not only had never asked God for forgiveness, but didn’t bring God into things like mistakes and learning from them. He furthered his impact by claiming Sen. John McCain’s war hero status was only because he was captured. “I like people who weren’t captured,” he said.

The room erupted in applause at each of his lines, with some kind of hypnotic approval.

Conservatives are flocking in droves to support this man, and many of us are left scratching our heads. How could this braggart, who has been bankrupted four times, married three times and wrote a book about the virtues of single payer healthcare and assault weapon bans suddenly become a conservative star? After once proposing a double-digit special tax on the wealthy, he decided that his best chance for building the Trump brand would be to re-embrace the GOP. Since then, he’s reversed his positions on immigration reform, political relationships, his opinion of Hillary’s performance as Secretary of State, taxation, gun control, universal health care and a myriad of other policies. Or, so we think.

All it took to be accepted was to spout some loose, unscripted comments wrapped with anger and a nativist-tone during a drawn out, blathering announcement to become #1. What kind of country do we live in that rewards amateur, Archie Bunker behavior in presidential candidates? Here, the boss truly is the Apprentice, and has no business running the show.

But, after a full month, the spontaneous gathering of support is getting creepy in its hastiness. It has become oddly blinding to his deep character flaws. It has now become a cult of personality, just as we saw with Barack Obama in 2008.

THE CULT OF PERSONALITY IS A HUMAN FLAW, NOT A PHILOSOPHICAL ONE

In many ways Trump and Obama are the same.

Both are the excess of their personalities.
Obama is the pretentious, assuming intellectual, and Trump, the bombastic, horns-first capitalist who litigated and greased his way to wealth. Wealth he reminds us of every. Single. Time. He. Speaks. (Don’t forget, he’s “really rich.”)

Both are peerless in their narcissism.
Obama’s smirk will eventually be trademarked after he’s gone – few others can imitate such indifference and confidence in such subtle tones. Trump, well, of course he feels led to tell us how awesome and rich he is again. “Really rich.”

Both are average speakers, off the cuff.
Whether it’s his defense of being “very pro-choice” in 1999, or his waxing philosophical about immigration in 2012, he’s not exactly Demosthenes. Neither is Barack Obama, if you engage him in a fluid, unscripted conversation. They cannot communicate effectively, and often sound like a bad used car salesman, not a bridge-builder

But mostly, both are caricatures. Not an archetype of “leadership.” An image created, not earned. 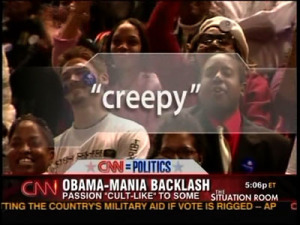 Barack Obama fabricated a storybook rise to the Presidency, and it was built on calculated marketing, not leadership. Likewise, Trump never built his wealth from scratch. He is no creator, nor is he an entrepreneur. He is not an innovator, thinker, engineer or motivator. He is a man who received a fortune from his father, learned quickly how to lose it, three times bankrupted, then used the power of litigation, shallow celebrity, and abuse of eminent domain to make himself rich again. He is no leader, just a guy who scratched the right ticket, and greased the right palms to get back into the game.

Side note: This lunkhead is so touchy, he filed a $100 million lawsuit in January of this year against the Palm Beach airport… for airport noise. Now, he’s suing Univision.

What is most sad about this cult of personality is the instinctive, hasty move for so many conservatives to support him. Men like Trump will always have a place in society for the same reason Kim Kardashian is a household name and soap operas make millions, lasting 40 years – daydreamers love drama. And this human condition knows no philosophical bounds. I just didn’t realize there were so many on our end of the political spectrum.

At some point, the TV, and social media goes off and real life begins. Reality, not reality TV. Hopefully soon, when the real games begin, the GOP primary can be a true battle of minds and hearts, not lawyers and different ways to say, “I’m rich.” America needs a true leader who has earned his place in the contest, not a capitalist who knows little about the free market we all embrace.

This cult of personality has gone way too far, and conservatives need to stop embarrassing themselves in their adoration for the loudest voice in the room. Trump’s time in the GOP will pass, but developing this flawed human trait into a political movement could spell doom for the GOP. And that’s just not a strategy I can accept for my kid’s future.

Trump is a liar and opportunist. I had a front row seat to his attempt to hijack the Reform Party in 1999 and 2000. I was a Youth Coordinator in the northwestern states at that time (in my more idealistic days), and Trump was adamantly liberal in almost every respect.

Below I have some evidence of his shallowness and contradictions. No one can be a conservative and still support Trump after this:

The documentary he suppressed in 1991:
http://trumpthemovie.com/watch/